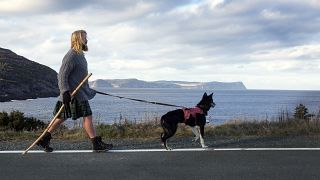 A kilt-wearing Scotsman and his faithful husky have completed an 8,000-kilometre walk across Canada. The pair are raising money to help rewild the Scottish highlands.

On Sunday, Michael Yellowlees and his furry companion, Luna took the final steps of their 9-month odyssey. They finally reached Canada’s most easterly point, Cape Spear in Newfoundland and Labrador.

It was back in March of this year that the Scottish duo set out from Tofino in British Columbia, with an ambition of crossing the mountains and prairies of the world’s second-largest country.

Michael, who is from Dunkeld and Birnam in Scotland, undertook the epic trek to raise money for Trees for Life. The charity is working to rewild the Scottish Highlands and the Caledonian Forest.

A coordinated conservation effort has been put into action to preserve the Caledonian Forest which once covered most of Scotland. It has now reached a breaking point following centuries of extensive logging.

Due to felling for timber and the creation of grazing areas for sheep and cattle, today the Caledonian Forest only exists as 35 individual remnants.

Raising more than £40,000 (€46,948) towards the rewilding of the Scottish Highlands, the 32-year-old wore a kilt every day of his trek - through snowstorms in the Rockies and the cold rain in Newfoundland.

Michael chose to cross Canada for his fund-raising adventure to capture the sense of vast wilderness that still exists in the country. He hopes that through the work of organisations like Trees for Life, Scotland will be able to restore the wilderness it has lost over the last few hundred years.