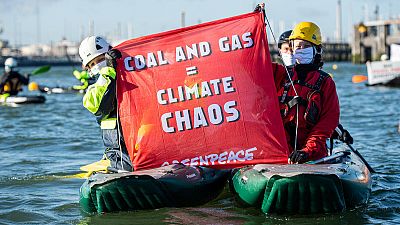 This morning 80 activists from 12 EU countries are blocking Shell’s main port in Rotterdam, the Netherlands, to protest against the oil corporation’s 'greenwashing' ads.

The protest marks the launch of a new climate campaign demanding a ban on all fossil-fuel adverts in Europe.

Much like the smoking ban on tobacco products in many European countries, the campaign wants to remove all examples of oil or gas companies using publicity to legitimise their harmful activities.

An investigation commissioned by Greenpeace, and researched by environmental news outlet DeSmog, accuses the companies of using 'greenwashing' to convince the public they are seeking climate solutions when they are in fact still the main causes of the climate crisis.

The six companies involved were:

"We’re here today to lift the veil on the fossil fuel industry, and confront them with their own propaganda," says Silvia Pastorelli, EU climate and energy campaigner and lead organiser of the ECI.

"Our blockade is made out of the very adverts that fossil fuel companies use to clean their image, to deceive citizens and delay climate action. The pictures in those ads look nothing like the reality that we’re surrounded by, here at Shell’s refinery."

The report by Greenpeace found that the companies were happy to talk the green talk, but less interested in putting it into practice.

“For all six companies there was a distinct discrepancy between the number of adverts and promotions focussing on ‘green’ activities, and the amount of their portfolios that appear to be dedicated to ‘green’ technologies,” it says.

The report also looked out for companies presenting ‘false solutions’ for credit.

A false solution is “a climate solution, presented by governments or companies that has either been proved to be actively harmful to the planet and or communities, or is so severely under-researched or developed that it cannot be seen as a substantial alternative to renewable energy technologies.”

BP was misleading consumers into thinking they were a renewables company, when they were spending 96% on oil and gas.

The worst offender was Preem. 81 per cent of Preem’s adverts were for green technologies or ‘false solutions’.

Yet only one per cent of Preem’s portfolio is dedicated to non-fossil-fuel energy.

Across all six fuel companies, 63 per cent of their advertising was found to be greenwashing.

“This trend extends far beyond the companies assessed in this report,” Greenpeace writes.

“Last year ClientEarth filed a legal complaint using OECD guidelines against BP for misleading consumers into thinking they were a renewables company, when according to Client Earth, BP were in fact spending 96 per cent on oil and gas.”

So how big is the discrepancy?

The difference between what companies make it look like they are doing for the planet, and what they are actually doing is stark - as they are mainly investing in fossil fuels.

For example, Shell is one of the most polluting companies in the world, and one of the world’s largest fossil fuel companies, according to Greenpeace.

Shell is one of the most polluting companies in the world,

According to Shell’s 2021 Q2 report, it has invested over €14 billion in oil and gas this year but only around €2 billion in renewable energy.

It is also planning on expanding its gas business by more than 20 per cent in the next few years.

The report found that the proportion of greenwashing adverts (81 per cent) from Shell was almost exactly the same as the proportion it invests in fossil fuels (80 per cent).