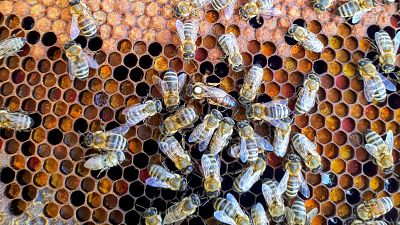 These fearless beekeepers have to climb a cliff face to collect their honey.

Hundreds of hives are attached to this mountain in China, which aims to imitate a natural environment and attract wild bees.

Beekeepers go up the mountainside using the hives as stepping stones to harvest honey and check in on the bees. The project is located in Shennongjia Nature Reserve, Hubei Province.

This region is home to some of the world’s rarest animals, including the golden monkey, clouded leopard and Asian black bear.

The Shennongjia Nature Reserve was established in 1982 and is full of rare plants which the bees use to collect nectar and produce their honey.

Roughly 700 wooden beehives hang from a cliff 4,000 feet above sea level on a mountain in China. An amazing vertical apiary...#bees#china#beekeeping#nature#honeypic.twitter.com/KQdEvp4JGQ

An average hive contains 30,000 bees in the summer months. A strong colony can fly the distance from the earth to the moon every day, according to the British Beekeepers Association.

Keeping the hives on a tall cliff also protects them from the paws of local bears and other animals who like to eat honey.

China is currently the world’s biggest honey producer according to the UN Food and Agriculture Organisation and exports around 100,000 tonnes of the sticky, sweet substance each year.