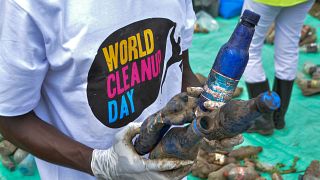 On Saturday an amazing 50 million volunteers from every corner of the world participated in the 2021 World Cleanup Day.

From divers collecting marine debris in the Pacific to children picking up trash on beaches in Africa, it was all hands on deck to make our planet a cleaner place.

Organisations from more than 180 countries signed up for this year's cleanup making it the largest coordinated cleanup effort in the world.

The annual cleanup day has been running for 13 years and volunteers have achieved amazing things during that time.

In 2008, in the small nation of Estonia, 50,000 people united to clean up the entire country in just five hours.

Let's Do It World, the Estonian organisation behind World Cleanup Day, aims to raise awareness of all the problems waste creates in the world.

While the numbers have not been finalised yet, it is expected that over 200,000 tons of trash were collected by volunteers across the globe on Saturday.

Like Earth Day, World Cleanup Day is non-partisan, apolitical, and is not affiliated with any national or global political party.