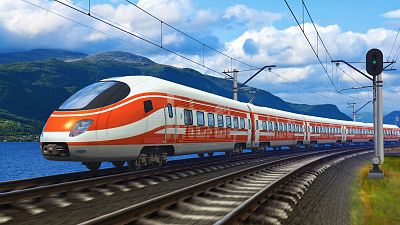 Given their chequered past, and present, a purpose-built connection between the US and China could be tricky. It would require huge cooperation between the superpower and the wannabe-superpower.

Nevertheless, back in 2014 there were numerous news reports that an underwater train was being built. An environmental and diplomatic win, potentially. But seven years later, there’s no sign of it. So we decided to investigate.

From China to the US in just two days

Reports in 2014 said the 8,078 mile-long train journey would go from China over to Russia, and on to Canada, before finally arriving at its destination, the US.

As the train crossed the Bering Strait (a narrow passage of water connecting the Pacific and Arctic Oceans), this 125-mile long stretch would mean the tunnel was underwater.

Chinese officials were considering the route the train would take, but insisted that it was feasible. An article in the state-run publication China Daily claimed the country had the technology and resources to complete a project of this scale.

"Right now we're already in discussions. Russia has already been thinking about this for many years," said Wang Mengshu, a railway expert at the Chinese Academy of Engineering in an interview with the Guardian.

The proposed "China-Russia-Canada-America" line would be 1,800 miles longer than the Trans-Siberian railroad and four times the length of the English Channel tunnel.

This would allow travellers to get all the way to the US in just two days.

Will the ambitious project go ahead?

The South China Morning Post was critical of the initial proposed costs of $200 billion (€170 billion). So according to recent reports, the project may be on hold.

However, interestingly, plans for the Channel Tunnel were delayed for 180 years before the UK-France tunnel first opened in 1994.

French engineer Albert Mathieu-Flavier first proposed a subterranean link between Britain and France in 1802 but it wasn't until 1987, that the British and French parliaments agreed to the project.

There is much speculation over whether the railway will actually be built. But given that China already has a huge rail network, it is possible. The country is home to the world’s largest high-speed rail network, stretching over 23,000 miles.

It also has the fastest commercial electric train, the Shanghai maglev. The magnetic levitation train line operates in Shanghai, linking Shanghai Pudong Airport to Longyang Road in the east of the city.

Maglev trains use superconducting magnets to suspend carriages above a U-shaped concrete guideway, meaning the train is always elevated.

From an environmental perspective, China is investing more and more into train travel in order to cut down on CO2 emissions from both the automotive and aviation sectors.

According to one study published in 2019, data shows that high-speed rail “significantly reduces environmental pollution by 7.30 per cent in China”.

The China-Russia-Canada-America train would be a huge financial investment and many argue that it may prove to be futile, as ocean shipping routes already exist and we might as well just continue using them. Some also wonder whether China and Russia would be likely to cooperate on this project, given previous and ongoing political tensions.

Would the China-US train line be environmentally friendly?

Trains are widely considered to be the most environmentally-friendly type of public transport. The greenhouse effect of gas emissions per kilometre on railway transport is 80 per cent less than cars. And a typical train line can carry 50,000 people per hour.

A train journey produces just 14g of CO2 per passenger per kilometre, compared to around 285g for air travel.

And high-speed rail lines, which can be used for both passenger travel and freight, are particularly efficient. They usually go at around 200 miles per hour and provide “convenience, safety, lower environmental impact and higher community benefits when compared to driving,” according to a recent report in GreenBiz.

We spoke to Thomas Earl from Transport & Environment about his view on the China-US train proposal, to find out whether he thinks it's doable.

“The key question we should ask is whether or not this would actually reduce the number of polluting transpacific flights,” Earl tells Euronews Green.

But crucially, “any new transport solution needs to both address rising transport emissions and run on clean, renewable electricity,” he concludes.