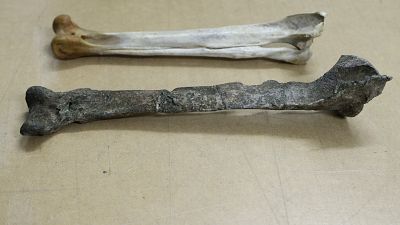 The fossil of a similar species, a tibiotarsus, bottom, is displayed next to a similar bone for an Emperor Penguin in Christchurch, New Zealand, Wednesday, Aug. 14, 2019.   -   Copyright  Mark Baker/Copyright 2018 The Associated Press. All rights reserved   -
By Jonny Walfisz  •  Updated: 23/09/2021

The fossil that a group of Kiwi children stumbled upon during a summer camp has been recognised as a new species of giant prehistoric penguin.

Back in 2006, the Hamilton junior naturalist club in New Zealand took a group of children to go fossil-hunting at the upper Kawhia harbour.

On the trip, they discovered far more than the small crustacean fossils they bargained for. Accompanied by an archaeologist, the group found what would be later identified as “the most complete fossilised skeleton of an ancient giant penguin yet uncovered”.

Researchers from Massey University in New Zealand and the Bruce Museum in the US analysed the fossil with 3D scanning technology at the Waikato Museum in Hamilton.

Research published in the Journal of Vertebrate Paleontology has defined the species they found as ‘Kairuku waewaeroa’, a new giant penguin species.

New fossil penguin on the loose! Meet Kairuku waewaeroa, a giant penguin from New Zealand. This penguin has a really great story - the fossil was discovered by children on a trip with the Hamilton junior naturalist club! pic.twitter.com/9aU2BVmOiX

Defining the ancient species of penguin

The penguin is believed to be between 27.3 and 34.6 million years old. The fossil has helped to clarify the timeline of how penguins developed to be the animals they are today.

“The penguin is similar to the Kairuku giant penguins first described but has much longer legs,” says Daniel Thomas, a senior lecturer in Zoology from Massey’s School of Natural and Computational Sciences.

The name ‘waewaeroa’ is Māori for ‘long legs’, as the species of penguin is significantly taller than other ancient penguins. The penguin would have stood at around 1.4 metres tall.

The Emperor Penguin, the tallest living penguin species, is generally around 1 metre tall.

“The fossil penguin reminds us that we share Zealandia (ancient New Zealand) with incredible animal lineages that reach deep into time, and this sharing gives us an important guardianship role,” Thomas continues.

The research suggests that the Kairuku penguins are a unique species to have only ever been found in Zealandia.

“Kairuku penguins had a broad distribution across Zealandia during the Oligocene. Interestingly given their likely offshore-foraging ecology, there are no records of Kairuku penguins yet reported on other continents,” the paper notes.

It’s sort of surreal to know that a discovery we made as kids so many years ago is contributing to academia today.

There have already been many species of penguin shown to have originated in New Zealand. This is another example, emphasising the importance of penguin’s to New Zealand’s history.

“Finding fossils near where we live reminds us that we share our environment with animals who are the descendants of lineages that reach back into deep time,” says Mike Safey, president of the Hamilton junior naturalist club who was 13 when the group discovered the fossil.

“How and why did penguins become giant, and why aren’t there any giants left? Well-preserved fossils like this can help us address these questions,” he continues.

Reflecting on making the discovery 15 years ago, Safey adds, “it’s sort of surreal to know that a discovery we made as kids so many years ago is contributing to academia today.”