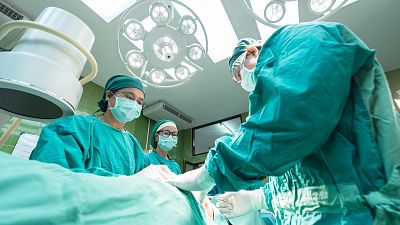 Climate education must be embedded into medical school, says GP Chris Newman   -   Copyright  Canva   -
The opinions expressed in this article are those of the author and do not represent in any way the editorial position of Euronews.
By Chris Newman  •  Updated: 28/08/2021

Dr Chris Newman, an NHS GP and co-founder of ‘Doctors for Extinction Rebellion’ gives us his take on why climate education should be an integral part of medical education.

What is the point of my job if we don't prevent climate change?

I was 38 years old and 15 years into my medical career when I realised climate change was a serious health problem. Two years later I work just two days a week, and spend the rest of my time as a climate activist.

Looking back, it bothers me that my profession failed to educate me, when there were so many missed opportunities to do so.

"The core concern is succinctly stated: climate change endangers human health. The warming of the planet will be gradual, but the effects of extreme weather events - more storms, floods, droughts and heat waves - will be abrupt and acutely felt. Both trends can affect some of the most fundamental determinants of health: air, water, food, shelter and freedom from disease."

I was a trainee GP when that bombshell statement came out, but it never trickled down. That crucial information was a blink-and-you'll-miss-it news item, one of many that day, swiftly trampled and never seen again.

It did spark some movement however, as barely a year later, the National Health Service (NHS) Sustainable Development Unit was formed in the UK, announcing in a statement a teaser of what could have been:

“The NHS, with its massive size and reach, could have a great influence on the rest of society by taking the lead on carbon reduction and climate resilience; taking climate change seriously comes close to being a duty of care for the service. But it will require a shift of philosophy and a cultural transformation within the organisation so that staff at all levels accept the likelihood of radical change.”

The relevance of the climate crisis to health was never shared with their 1.5 million staff.

Such a ‘shift in philosophy’ and ‘cultural transformation’ is only possible through education and shared stories. But it never happened. NHS discussions were kept within a small group of people and the relevance of the climate crisis to health was never shared with their 1.5 million staff.

Had this education occurred it would have buttressed their fledgling climate plans against what was to come. But the NHS was battered by a major restructure in 2012, followed by austerity and Brexit. The fragile seeds of change were crushed in the Tyranny of Now.

The power of a medical workforce

When one person like Greta Thunberg can do so much, is it too romantic to imagine that 1.5 million informed NHS workers might have made a difference?

Doctors and nurses might have leveraged their trusted roles to educate the public, perhaps through posters and infographics in GP practices or hospitals. They might have driven faster shifts to clean energy sources in NHS buildings, or taken a much needed health angle into activist groups such as Greenpeace.

Many more would have started talking about it with friends and family. Without question the plans of those at the top would have been subject to more scrutiny, and their already difficult jobs would have been made more challenging; but society would have felt the impact.

It is late to act now, but not too late.

Big change is coming whether we like it or not. It can be voluntary, or it can be forced upon us by the hard-hearted forces of physics.

We cannot lament what could have been, we must instead make the most of the choices we have been given. The next generation may not be so lucky.

First, everyone in health must understand both the science behind climate change and the havoc it will wreak on our already strained health service if it is not urgently addressed.

Just as we are motivated to do a good job by the heartache of losing a patient, so too will we be motivated to work on climate change if we engage with what it would mean to collectively fail. This education cannot be optional. An expertly sourced, single narrative must be introduced as mandatory training for all health professionals, regardless of seniority.

Indeed this education is even more important for senior staff with incumbent power than it is for students.

This education is even more important for senior staff with incumbent power than it is for students.

Second, we cannot continue to operate in a silo. Getting the health system to Net Zero will be meaningless if society as a whole does not follow. We have to reach outwards. As COVID-19 showed, profound behavioural changes can be driven through public health messaging. You couldn’t walk five minutes without seeing a sign telling you to wear a mask, wash your hands or keep a safe distance.

Thus all the news stories people read about on their sofas were reinforced in everyday life. This consistency led to trust, which led to a rapid change in culture. This can start now in local hospitals and GP practices. We should not wait for permission. We do not have time.

Third, more of us around the world need to stand side by side with non-violent civil disobedience groups. The cultural effects of the school strikers and Extinction Rebellion have been profound, because it has led to more public debate and emboldened institutional allies to speak up.

The tangible presence of medics at protests will help the public realise that the climate crisis is the greatest threat to health humanity has ever known.

Some in the press would like to paint protestors as ‘just children’ or as ‘extremists’ who want to disrupt our way of life, because it fits their narrative. The tangible presence of medics, surgeons, nurses and midwives at protests will challenge these stereotypes, and help the public realise that the climate crisis is the greatest threat to health and wellbeing humanity has ever known.

Finding peace in this crisis

Many of my colleagues say the same thing. “What is the point of saving lives now if we then just leave them to get ruined by climate change?”

Some like myself have found peace through joining Doctors for Extinction Rebellion, which accepts all health professionals, others have stood for election in local politics, yet more have focused on driving local change in their hospitals, practices and health institutions.

There are so many different ways to take action. Every single one is vital.