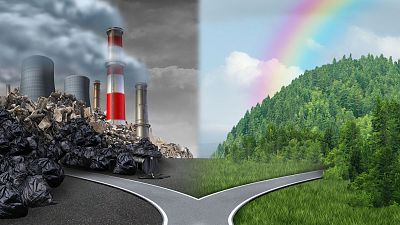 Is climate misinformation stopping us from taking action against the ecological crisis?   -   Copyright  Canva   -
The opinions expressed in this article are those of the author and do not represent in any way the editorial position of Euronews.
By Jack Marley  •  Updated: 07/07/2021

Jack Marley is the Environment & Energy Editor at The Conversation. He has a research background in marine biology and began his media career reporting on a fossil fuel divestment campaign for his campus paper. His main interests are in climate change, biodiversity and animal behaviour. Here, Jack gives us his take on the global crisis of climate information.

Over the last few years, we’ve seen a huge surge in misinformation exploiting uncertainty around climate change. As it sweeps across fake news websites and social media platforms, the climate crisis continues to be subjected to a significant spread of fabricated stories and conspiracy theories.

These are fuelled by climate deniers, conspiracy theorists and misguided individuals often with a corporate or political agenda, perpetuating misinformation as the truth. Once people have read it, they often share it. This could have a damaging impact on our ability to solve what is fast becoming an ecological emergency.

While we have clear targets in place, the UK is to meet net-zero emissions targets by 2050, the EU to make cuts of 55 per cent, compared with 1990 levels, and the US to reduce carbon emissions to 50-52 per cent below 2005 levels by the end of the decade, we still have a way to go.

To have any chance of meeting these targets, we need to completely change our lives from the way we travel, to the food we eat and the products we buy. The next couple of decades are critical. We cannot afford misinformation creating confusing narratives, distracting us from urgent action that needs to be taken to combat climate change.

So, while people continue to engage with climate change misinformation how can we, as a media industry, come together and counter this?

Despite the impact of climate change being visible to everyone, misinformation still runs rife. For example the big storm in Texas earlier this year caused widespread blackouts and left millions freezing.

Extreme weather conditions are widely known to be linked to climate change, yet the conservative website The Gateway Pundit blamed President Joe Biden’s energy policies for the outage claiming they prevented Texas plants from generating the power the state needed.

To many of us, these stories and theories seem implausible, but millions of people still read and share them every day.

Conspiracies are one of the main culprits causing a surge in misinformation on climate change. One of the most shared stories last year was from conspiracy site, Natural News, which claimed that NASA admitted that climate change occurs because of changes in Earth’s solar orbit and not because of SUVs and fossil fuels.

The article was engaged with a staggering 4.2 million times and received significant shares on Facebook.

To many of us, these stories and theories seem implausible, but millions of people still read and share them every day. The impact of these stories is huge.

Truth-based stories must drown out misinformation

To counter misinformation, we need to understand why it resonates with audiences.

I believe this is largely down to connecting with them on an emotional level and appealing to the material conditions impacting their life that they can relate to. Take the Texas outage, blaming the incident on Joe Biden’s policies was a far easier narrative for people who had been affected to digest, than linking it to climate change, which for many was too abstract.

As a news source, it’s important to preserve a sense of nuance, without being seen as pious or too authoritative. To have any chance of drowning out misinformation, we need to ensure we meet audiences where they’re at and connect with their real life experiences. While facts and stats are a vital part of truthful storytelling, dazzling people with science by brandishing big headlines and stats can sometimes be a turn off.

While facts and stats are a vital part of truthful storytelling, dazzling people with science by brandishing big headlines and stats can sometimes be a turn off.

Instead data should be brought to life by experts like academics and scientists with narratives that are personable and relevant to everyday people. This will enable us to successfully engage with a broader audience.

Coming together as a media industry

There’s no doubt we’re at a critical stage of our journey in trying to solve the climate crisis, as a planet.

But misinformation is creating confusion and inertia.

However, to counter it, we as an industry need to come together and take the time to understand why misinformation is so successful and even take learnings from it. This will help us ensure truthful storytelling, while always grounded in facts and stats. It focuses more on portraying the human side of the problem, by showing how it impacts everyday people and why they should care.

Until we address this, we won’t be able to make meaningful progress.

Most in North Macedonia think COVID was made to control humans: poll

Why America’s record-breaking night temperatures are so concerning