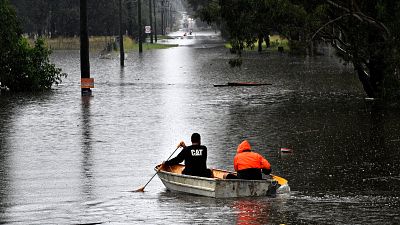 Thousands of people have been evacuated in New South Wales (NSW), Australia, due to unprecedented flooding. More heavy rain is predicted to fall in the region in the coming days.

Some 10 million people are currently under an extreme weather warning across Australia after what has been described as the worst flooding NSW has seen in 50 years.

Around 10 million Australians in every mainland state and territory- except WA- are currently under a #weather warning as two major systems collide.

Just over a year ago, vast swathes of the state were burnt by widespread wildfires. NSW Premier, Gladys Berejiklian, told reporters that many of the regions “being battered by the floods” were the same areas hit by the fires and droughts last summer.

She added that these were “challenging times” for the Australian state.

“I don’t know any time in our state’s history where we have had these extreme weather conditions in such quick succession in the middle of a pandemic.”

“This disaster and last year’s bushfires show that the government needs to plan and prepare for the worst case scenario in emergency services,” Leighton Drury, NSW State Secretary of Fire Brigade Employees’ Union said in a statement.

Is climate change the cause of Australia’s natural disasters?

Released in 2020, Australia’s State of the Climate report found that there had been an increase in heavy rainfall events in the country adding that global warming could make this even worse in the future.

Anticipating human influence on weather events can be difficult as there are a lot of factors that can affect the amount of rain that falls. But some experts say that even a seemingly minimal increase in rainfall due to climate change can be disastrous.

In the past decade, extreme weather events have cost Australia nearly €23 million according to environmental communication group, the Climate Council. In a recent report, the organisation outlined evidence that suggests the ongoing environmental crisis could be exacerbating the effects of heatwaves, cyclones, fires and other extreme weather events.

“The intense rainfall and floods that have devastated NSW communities are taking place in an atmosphere made warmer and wetter by climate change, which is driven by the burning of coal, oil, and gas,” says Professor Will Steffen, a spokesperson for the organisation.

He added that decisive action is needed in the next 10 years to “bring climate change under control”.