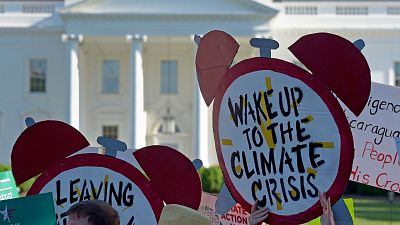 At midnight last night, the United States became the first country to formally leave the Paris Agreement on climate change.

The move was initially triggered by President Donald Trump a year ago. But amid last night’s election chaos, the country officially left the pact which would keep average worldwide temperatures “well below” 2 degrees celsius.

We took a look at how the process works and what happens next.

Why has it taken so long for the US to leave?

When the pact was signed, the Obama administration wanted to make sure that if the leadership of the US changed, it would take time for them to leave.

This was because attempts to put together an international agreement on climate change had in the past been prevented due to the country’s internal politics.

The Paris Climate Accord was signed in December 2015 but it did not come into force until 4 November 2016, exactly four years ago today. Countries could not give notice to leave until 3 years had passed - which the Trump administration did on the first possible day last year.

But they also had to give 12 months notice to the UN. That brings us up to today, when the US officially exited.

What does this mean for the US?

After leaving, the US will no longer have to meet emissions targets it set for itself in 2016. It also won’t have to report its emissions to the UN. Questions have been raised about why Trump went to such lengths to leave the agreement, as pledges are technically made voluntarily. Many suggest he could have simply revised the goals the nation set for itself.

Alongside emissions, the 189 parties still committed to the agreement also promise to speed up investments into reaching a low-carbon future. This includes policies and actions that will help to limit the potentially devastating effects of global warming.

The overall goal is to make sure the global temperature doesn’t surpass 1.5 degrees above pre-industrial levels.

But this isn’t necessarily the end for the US. Signatories can apply to the UN for readmission, so it could be back into the agreement within 30 days. This is something Joe Biden has said he will do on day one as president if he wins the closely contested election.

On a more local level, many US states and cities are bringing in their own climate policies. These initiatives, or policies below the level of the federal government, so far encompass around two-thirds of the US population according to the World Resources Institute.

These could help to limit Trump’s ability to roll back environmental policies if he decides to keep the US out of the Paris Agreement in the long term.

What does it mean for the rest of the world?

Being an outsider could have impacts on international trade around the world. France generally opposes trade deals with countries outside of the agreement, which could make securing a new pact with the EU hard for the US.

Without the US, the Paris Agreement only covers around 80 per cent of global climate pollution emissions compared to the 97 per cent it did before. Some are also worried that it could encourage other countries to push back against climate science.

Saudi Arabia, Kuwait and Russia have all signalled that they could make similar decisions to the US by refusing to set the ambitious climate policies needed to keep warming to a minimum.

Experts believe it is unlikely that other countries will follow suit, but it could mean that some are encouraged to adopt a much slower approach. With a big polluter like the US outside of talks, countries such as China and India who have growing economies and emissions could now be harder to convince when it comes to curbing greenhouse gases.

There also may be financial consequences as the US originally pledged $3 (€2.56) billion to help smaller, poorer countries transition away from fossil fuels. It was the largest amount for any country to give - but the Trump administration cut it by two thirds even before leaving.

13 other nations including the UK, France and Germany have recently doubled their original pledges. But with the US now gone, it could leave a potential financial shortfall for many of the essential projects being funded by this money.

However, 136 out of the 184 pledges made in the Paris Climate Agreement are already insufficient to reach global warming goals. So whether the US leaving will make a significant financial difference to the future of the planet remains to be seen.