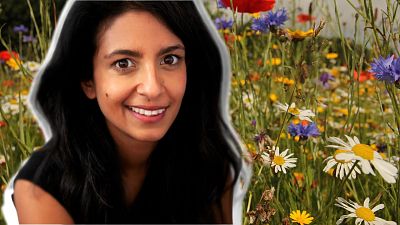 Parents are keen for green issues to be added to school curriculums, according to new research.

A study by Noah’s Ark Foundation found that families want to see environmental studies taught in a more immersive and interactive style, to help students fully engage with the subject.

Former Blue Peter presenter and author Konnie Huq has lent her support to the campaign, as she joins the call for schools to implement better environmental education from a young age.

“Parents want their kids to be taught about the environment, but in a more immersive way,” Huq says to Euronews Living, “and I think it does start at a primary school level. The earlier you engage and enthuse kids, the earlier it seeps in and becomes a part of their consciousness and ingrained in their being.

Earlier this summer, schools in Plymouth, UK, launched the country’s first ever ‘ocean curriculum’ which incorporates marine studies into the classroom across all subjects. Huq feels this example from the Connect Academy Trust is a great blueprint for how other schools can incorporate the ecosystems on their doorsteps into their teaching.

This is particularly important for young people in more urban spaces, who don’t have the ocean or hectares of farmland on their doorstep. Huq believes that this immersive interaction with nature can work just as well for inner-city schools.

“There’s lots of urban wildlife and lots of greenery present in city environments - even just looking at things like a puddle or a pond in a muddy environment, or somewhere by a railway track or by the river, you can find loads of little beasts and bugs,” explains Huq.

“Town dwelling wildlife is so massively important, and there’s loads of stuff which can be done in an urban environment - like having green buildings for example, or just a small patch of greenery or grass.

“It’s important not to dismiss cities as a get-out clause for not doing something like this, it’s easy to do and it’s about getting people enthused and wanting to do it. I’m in London, and my kids go to a school with a tiny nature garden and a greenhouse, where they grow stuff - you can do quite a bit in a limited space,” she adds.

Noah's Ark Foundation hope that their ambitious conservation programme, which they are working to fund, will help provide more immersive, nature-based learning experiences for kids around the world.

Not practising what they preach

Interestingly, the results of the survey found that 90 per cent of parents felt their children have a good grasp on environmental issues - but at the same time, many reported that their kids don’t always apply this understanding to their own lives. Although more than two-thirds said their children pass on eco advice at home, encouraging their family members to recycle, drive less, and use less energy for example - this doesn’t always get practiced by the kids themselves.

This is why Huq is particularly passionate about green education being an immersive experience. “People can be very clued up on stuff like carbon footprints and rising sea levels, but they often can’t join the dots to the bigger picture of how it all fits in with biodiversity and how everything is dependent on everything,” she explains.

But Huq also feels that consumerism is a major problem facing young people, driving not only the climate crisis but also creating a disconnect between understanding and individual actions.

“I think part of bridging the gap is not having such an obsession with consumerism,” Huq says. “Literally from babies with designer baby grows, to the toys kids have and so on - it’s all ending up in a landfill. People just want to fit in and keep up with trends, so the way to enthuse them is to keep pushing how cool it is to be environmentally friendly, and not to have lots of mindless toys and junk.”

Huq explains the Swedish concept of ‘lagom’, which means just the right amount, and has become a growing movement in the country. “Where other countries have tended to be obsessed with designer clothes, in Sweden it’s become trendy to not be ostentatious and showy.

“And we’re seeing a real shift when it comes to being eco-friendly, it’s something that people want to be now - but if we can start with our kids, then the adults they become will have these ideas ingrained.”