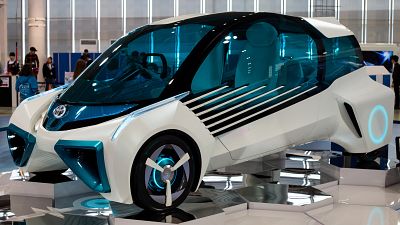 Let’s get the main question out of the way first. What is a hydrogen fuel cell vehicle? And how is it different to the host of battery-powered electric vehicles making their way onto the market by manufacturers from Jaguar and Audi to Nissan and Renault?

Hydrogen fuel cell cars have batteries onboard which store hydrogen and oxygen and power the vehicle with chemical reactions between the two elements to create water and energy. Sometimes known as fuel cell electric vehicles (FCEVs), they have exhaust pipes but the only thing that escapes from them is water. The cars need refuelling, but with hydrogen rather than petrol or diesel fuel. For each fill of hydrogen, the car will gain 320-405km (200-250 miles) of range.

Meanwhile, conventional electric vehicles, often known as battery-operated electric vehicles (BEVs) are what we tend to think of as the most common fully electric cars. Like the Nissan Leaf, BMW i3, and Teslas. These cars are powered by batteries which store charge in a similar way to phones, though many electric cars do manage to give themselves a slight recharge when braking, by converting the heat produced into electricity.

However, they’ll still need recharging at a mains electricity point after every 160-500km (100-310 miles). And that’s the main bugbear for many considering a BEV. With a standard EV and charging point, it could take up to 12 hours to fully charge a battery. Though rapid charge points exist, it will still take up to half an hour to add 160km of range.

That compares with just a few seconds refuelling a petrol or diesel car on the forecourt. It’s here where fuel cell cars come into their own as a zero emissions alternative that’s also quick to refuel. Refuelling with hydrogen will take a couple of minutes, similar to the current practice.

With the basics out of the way, we asked two experts for their take on this new tech and when, if ever, we’ll see it taking the automotive industry by storm.

Why haven’t most people heard of hydrogen fuel cell vehicles?

“Hydrogen car development has taken a back seat due to the fact that electric vehicles are more popular among the public,” Mark Barclay, e-commerce manager at GSF Car Parts, tells Euronews Living.

“But there are benefits to hydrogen that outweigh electric — sometimes literally, as hydrogen fuel cells are much lighter than powerful batteries. As you can top up a hydrogen car much quicker than charging your electric model, they’re perfect for public transport and businesses that can’t afford vehicle downtime.”

So, what are the pros and cons of fuel cell vs electric, hybrid or standard cars?

The decision to buy an electric or non-combustion engine car comes down to four key criteria:

That’s according to Jeremy Parkes, global business lead for electric vehicles at Norwegian renewable energy tech consultancy and classification society DNV GL, who researches buying habits and what the future will hold for the roads.

“In terms of range, current hydrogen fuel cell electric vehicle models are slightly better than battery electric vehicles,” he says. “However, when looking at performance, the price point and the availability of recharging/refuelling, EVs are winning.”

What are the factors standing in the way of mass adoption of this tech?

“BEVs can already be conveniently charged at the passenger’s home, something that is not be possible for FCEVs. It should also be noted that the CO2 emissions from a BEV over its lifetime are not only significantly lower than an ICE vehicle but are also lower than FCEV, where the majority of hydrogen is generated using fossil fuels, through methane steam reforming.”

The experts agree that a major factor preventing uptake at the moment is the prohibitive cost. Barclay adds: “Hydrogen fuel cells are very expensive, and there are very few places to refill in the UK, so the infrastructure just isn’t there to support the technology at the moment. There are also safety concerns among the public around the production of hydrogen and storage facilities, as hydrogen gas is extremely flammable.”

How will prices compare in the long run?

“BEVs are already much cheaper, both the upfront and running costs for FCEVs are higher than for BEVs,” Parkes tells Euronews Living.

“Many new technologies struggle getting to scale which is crucial for the reduction of costs, since every time the production levels of a new technology increase the costs will decrease. For battery technology, we see a cost reduction of 19% for every doubling of the production levels. Already we see the total number of BEVs being manufactured and sold globally in the millions, compared to hydrogen, which amount to just a few tens of thousands being sold to date.”

Who's working on the tech and when will we see it?

“Toyota, Honda, and Hyundai already have hydrogen cars on the market and Europe is catching up,” says Barclay. But he still thinks hydrogen cars “clearly have some way to go before they take over the roads” to the extent electric and hybrid cars have.

“The industry still needs to adapt to these new technologies as investments continue to be made to improve the concept of hydrogen powered vehicles, mostly to reduce cost,” he says. “So, hydrogen cars should begin to threaten electric vehicles or even overtake them within the decade, and businesses should be prepared for that.”

Parkes disagrees. “Ultimately it comes down to two factors. The proven scalability, and hence the cost reductions of battery technology, and the poor charging infrastructure for fuel cell cars mean that BEVs are expected to dominate the passenger vehicle market in the coming decades.”

He adds: “There are still some expectations in the market that fuel cell technology might scale-up. For instance, by the rise of producing hydrogen though electrolysis, driven by very low electricity prices due to excess renewable energy, which could form a business case for hydrogen production. However, it should be highlighted that with current technology this is very inefficient, approximately three times as much energy needs to be put into the process compared to the energy available in the hydrogen produced.”

There have been allegations of unethical and unsustainable sourcing of raw materials for EV batteries. Are they true and should people be worried?

Critics have slammed reports of unsustainable sourcing for the lithium ion batteries that go into conventional electric vehicles. However, “they ignore the innovation push in the industry that will lead to major cost reductions, as well as alternative ecological battery solutions”, Parkes says.

“Not only are BEVs more ecological in the short term, but also more sustainable and responsible in the long term. The industry is making rapid advances as we scale-up, developing new battery types for EVs such as the use of solid-state batteries, which can charge and discharge faster and have a higher energy density than li-ion batteries, as well as using less rare metals in its production process.”

So, that’s it. A beginners’ guide to the world of hydrogen fuel cell vehicles and how they compare to the mainstream electrical vehicle. If you’ve got any more questions you’d like answered, let us know in the comments section below.