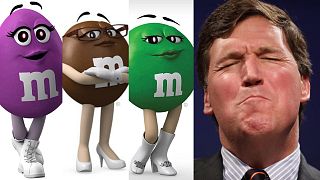 M&M's has given up using the famous candy characters as “spokescandies” in its advertising. Rightwing political commentator Tucker Carlson must be thrilled.   -   Copyright  M&Ms - Fox News
By David Mouriquand  •  Updated: 24/01/2023

Spare a moment, no matter how painful it may be, to think about Tucker Carlson.

The American conservative political commentator has been on a mission for a while now about “liberal woke agendas," specifically regarding M&M’s and how outraged he was with the makeover the Green M&M underwent last year.

The Fox News personality condemned the changes made to Green – essentially a change of footwear – because they made the character “less sexy.”

The unhinged reaction included Carlson stating that “M&M’s will not be satisfied until every last cartoon character is deeply unappealing and totally androgynous. Until the moment you wouldn’t want to have a drink with any one of them. That’s the goal.”

Yes, Tucker Carlson has been bemoaning the fact that he won’t get to take an anthropomorphized chocolate character out for a drink and God knows what else.

Asreported by Euronews Culture in September 2022, the makeover caused outrage on social media, with many criticizing the loss of the character’s signature look. A petition to “keep the green M&M sexy” tallied over 20,000 signatures.

Now, in a surprising turn of events, M&M's has given up using the famous characters as “spokescandies” in its advertising.

Mars Wrigley North America says it is taking "an indefinite pause from the spokescandies” - an equally unhinged term that casts its fictional chocolate characters as representatives of their "global commitment to creating a world where everyone feels they belong and society is inclusive."

“In the last year, we’ve made some changes to our beloved spokescandies,” the chocolate candy brand said in a statement. “We weren’t sure if anyone would even notice. And we definitely didn’t think it would break the internet.”

This decision behind this hiatus is also due to the arrival in September of a new member of the gang: Purple.

Purple is the third female M&M, after Green and Brown, created, according to M&M's, "to represent acceptance and inclusion". Purple symbolises support for the LGBTQ community, with the colour having become a symbol of feminist struggle.

Purple’s arrival also provoked a torrent of criticism, with Internet users blaming Mars Wrigley for having politicising the sweets.

The controversy reared its head once more at the beginning of this year when a special limited-edition packet of M&M's showed only the three female characters, Green, Brown and Purple.

"The 'woke' M&M's are back," said Tucker Carlson, who mocked Green as being "possibly a lesbian" and that Purple was "fat", referring to her oval rather than round shape.

Once again, and let it percolate: Carlson is a grown man obsessed with sexualizing fictional chocolates.

Not that Mars have anything to cheer about. Rather than back its choices, the company has bended to the will of the American conservative right with this indefinite candy character hiatus. They have, however, tapped beloved comedian and actress Maya Rudolph to represent the product instead.

“We are confident Ms. Rudolph will champion the power of fun to create a world where everyone feels they belong.”

So, treat yourself to some chocolate today if your eyes rightly rolled so far back into your head you might as well be blind at the thought of multinationals opportunistically passing off marketing tactics as somehow meaningful.

And do spare a moment for Tucker Carlson and his disturbing obsessions, as well as for all those who contribute to the very Occidental art of overthinking when you have nothing better to do.