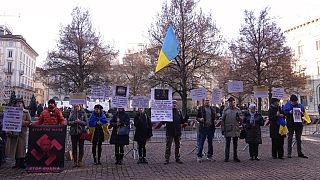 Ukrainians protest at the showing of Boris Godunov   -   Copyright  Antonio Calanni/Copyright 2022 The AP. All rights reserved
By Euronews  •  Updated: 08/12/2022

It’s known across the world as one of the finest opera houses. However, Italy’s La Scala theatre is faced with a controversial matter: Is it possible to separate Russian culture from the decisions of the Russian government?

La Scala has opened its new season with the Russian opera "Boris Godunov". Due to the war in Ukraine, some have argued that Russian culture shouldn’t be showcased in Europe.

However, the President of the European Commission, Ursula von der Leyen, sees it differently, arguing that Russian culture and the actions of the Russian government should be kept different.

“The Ukrainians are fantastic, brave and courageous people and we support them with whatever is necessary, and as long as it takes. I think we should not allow that Putin [sic] is destroying culture".

In response to criticism, La Scala's management has reiterated its support for Ukraine, holding a benefit for the country, which raised 400 thousand euros.