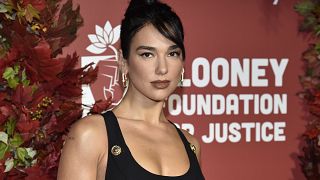 The Levitating singer received the honour on Sunday at a ceremony with the nation’s president Bajram Begaj.

Lipa, of ethnic Albanian origin, is set to perform at Monday's celebration of Albania's 110th anniversary of independence.

The move also comes at a time when the UK government has experienced sharp criticism for demonising Albanian immigrants to the country.

Born to immigrant Kosovar parents in London, Lipa, 27, is a Grammy award-winning musician.

In 2020, Lipa courted controversy after posting a banner used by the supporters of the so-called "Greater Albania," which incorporated Kosovo, Albania and other ethnic Albanian majority territories into one country.

The star posted the image on social media in response to a petition for Apple Maps to feature Kosovo as an independent nation.

The country’s status is not universally recognised and is most prominently denied by Serbia, Russia and China.

On one occasion in 2014, this particular banner caused a football match between Serbia and Albania to descend into violence when a drone unfurled it above the pitch in Belgrade.

Lipa was accused of being in favour of Albanian expansionism; however, she later clarified she was against “ethnic separatism”.

"We all deserve to be proud of our ethnicity and where we are from," Lipa said at the time.

"I simply want my country to be represented on a map and to be able to speak with pride and joy about my Albanian roots."

Likewise, fellow pop singer Rita Ora, also from Kosovo, has spoken out for more recognition for the country.

Check the video above for footage of the ceremony.