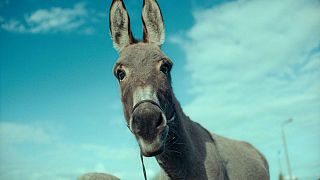 After leaving a traveling circus, EO begins a trek across the Polish and Italian countryside, experiencing cruelty and kindness in equal measure.   -   Copyright  ARP Sélection
By Euronews  •  Updated: 30/09/2022

Following its success at the Cannes Film Festival earlier this year, EO by renowned director Jerzy Skolimovski is featuring at the New York Film Festival, starting today. In an interview with Euronews, Skolimovski says he hopes his picture will encourage people to see animals differently.

It was one of the most talked-about productions at the last Cannes Film Festival and won the prestigious Jury Prize and the Soundtrack Award.

EO is the latest picture by the 84-year-old Polish film master Jerzy Skolimovski, and centres on EO, a mule who journeys through Europe experiencing the good and bad of humanity along the way.

Skolimovski spoke to Frédéric Ponsard for Euronews and said, "I have a message to pass to people, it's a message about our treatment of animals."

"Humans generally have a wrong attitude to animals. They are very kind to their pets at home but, generally speaking, we treat animals as objects, not as living creatures," he says.

The film is a co-production between Poland and Italy, where EO will end his journey after crossing Central Europe and the Alps.

But the question is, does EO escape his fate and end up in the slaughterhouse, like millions of animals every year?

"I still feel guilty that I wasn't able to become the full vegan," confessed Skolimovski.

"I still eat a little bit of meat, but I cut it to two-thirds at least. And if this film is of interest to audiences, maybe if we all start to eat less meat, then the torturing of animals wouldn't be necessary. I keep my fingers crossed that this film will appeal to the hearts of many people for the better treatment of animals."

"Let's be good to our small brothers," he concluded.

Calling viewers to treat animals with kindness, EO is in competition at the 60th New York Film Festival, which starts today, Friday 30 September. EO will be released in Poland at the end of September, and will feature in cinemas across the European continent this autumn.

EO has also been nominated for next year's Academy Awards in the International Feature category.