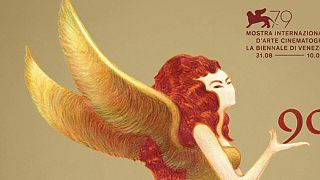 The Venice Film Festival is the oldest international film festival and one of the most important, especially considering its proven track record for premiering future Oscar contenders.

The 79th edition kicks off today (until 10 September) and here are the 10 Golden Lion-contenders to look out for. These are the films everyone will be talking about in the second half of this year and which will dominate awards chat once the fall festival season is over.

Best of all, some of these titles – which will also be heading to the Toronto International Film Festival (TIFF, 8-18 September) and the New York Film Festival (30 September - 16 October) – have already set release dates, so wider audiences will be able to watch them sooner rather than later.

It’s hard to underplay how much buzz has been generated around Blonde, Andrew Dominik’s fictionalised chronicle of the life of Marilyn Monroe.

Based on the novel by Joyce Carol Oates and starring Ana de Armas (who is already being touted as a strong contender for next year’s Oscars), Blonde is one of the most eagerly anticipated titles this year, not only because of the talent behind and in front of the camera, but because it holds an NC-17 rating (the European equivalent of an 18-rating). This signals that this could be that rarest of things for a biopic of a beloved icon: a film that not only takes some risks but foregoes an overly reverent and sanitized approach to actually say something that goes beyond ‘Wasn’t she iconic?’.

And by the looks of the trailers and the director’s comments (“There’s something in it to offend everyone”), this could well be the daring awards juggernaut to beat this year. Count us excited!

The behind-the-scenes chat around Olivia Wilde’s psychological chiller is currently monopolizing the discussion, with Wilde and leading man Harry Styles’ burgeoning relationship, Florence Pugh declaring she won’t be doing much press for the film due in part to the ongoing obsession with the film’s steamier moments, and the online lambasting of Styles’ American accent… Which, in all fairness, sounds terrible.

But from the looks of the trailer, this paranoia-fueled mind-bender set in a utopian Californian commune in the 50s looks like great fun. Premiering in the Out of Competition section, Pugh and Styles play a young married couple whose carefree existence is threatened when she begins to suspect that there might be sinister underpinnings to their perfect lifestyle. Chris Pine joins them as the possible evil mastermind behind the commune (and potential embodiment of an allegory about the fractured American Dream), and the chilling Stepford Wives vibe emanating from the promotional material feels like Don’t Worry Darling could be both sexy and deeply sinister. A perfect combination.

Bardo (or False Chronicles of a Handful of Truths)

This brilliantly-titled semi-autobiographical mood piece about a renowned journalist and filmmaker’s journey home to Mexico to sort out a familial crisis as well as his own existential plight feels like it has the potential to be Alejandro G. Iñárritu’s Roma.

And considering Iñárritu is a bit of an Oscars darling, having won best director for his last two films Birdman (2014) and The Revenant (2015), the chances that Bardo will head to awards glory are high. Expect it to not come home empty-handed from the Lido…

Release: Bardo is a Netflix release and should head to the streaming platform by the end of the year for prime positioning in time for Oscar season. No trailer has been released at this time.

The Chalamaniacs will be back in full force on the Lido this year, with the abundantly charming Timothée Chalamet returning after last year’s Dune. He teams up with his Call Me By Your Name director (and Venice favourite) Luca Guadagnino for an adaptation of Camille DeAngelis’ novel about a pair of drifters (Chalamet and Taylor Russel) who embark on a road trip and fall in love. So far, so coming-of-age by-numbers… Except that these two scamps dabble in cannibalism.

Considering how deftly Guadagnino handles gory content (see: 2018’s distressingly exquisite Suspiria, which also premiered in Venice) and crafts some of the most sensorial cinematic journeys put to screen, Bones And All is without a doubt one of the most anticipated indie titles of 2022. And why wouldn’t you want to sink your teeth into a tender yet bloody love story that explores the intense impossibility of love?

Release: November, after it screens at the NY Film Festival.

Venice's Artistic Director Alberto Barbera stated in this year's programme press conference that there’s a lot more to the festival than red carpet selfies, describing festivals as “windows open to the world” and that “the window of Venezia 79 certainly cannot ignore what happens before our eyes”. Barbera also expressed the festival’s support for Iranian filmmakers persecuted in their country and his dismay at the incarceration “for no reason” of Jafar Panahi, Mohammad Rasoulof and Mostafa Al-Ahmad, directors who are “only guilty of using their right to freedom of expression”.

True to his word, one film in Competition this year supports the voice of the oppressed: No Bears, the new film shot in secret by Jafar Panahi, who was sentenced to six years in prison this year.

Panahi is no stranger to Venice, having won the Golden Lion for The Circle in 2000. His newest film is a political thriller that follows two parallel stories of love. He has cast himself at the center of the drama, and considering Panahi’s unparalleled capacity for interweaving sociopolitical themes within compelling narratives, No Bears could very well be one of this year’s most urgent titles. It will certainly serve to remind audiences how lucky they are to be watching the output of a voice that refuses to be silenced.

Joanna Hogg and Tilda Swinton team up once more after The Souvenir diptych for a Martin Scorsese-produced mystery. Not much is known about the plot, aside from the fact it follows an artist and her mother journeying back to their home and unearthing some long-buried secrets.

A new film by Hogg is always something to get excited about, and considering her sophisticated writing and precise filmmaking style that manages to create haunting musings on alienation, the prospect of a gothic twist on parent-child dynamics makes The Eternal Daughter doubly alluring.

Release: TBC. The Eternal Daughter heads to TIFF in September after its Venice premiere and the NY Film Festival in October. Don’t expect a release before the beginning of next year. No trailer has been released at this time.

Darren Aronofsky loves him some Venice. He premiered 2006’s The Fountain there, as well as The Wrestler, his psychological horror trip Black Swan and the overwrought headscratcher mother!, winning the Golden Lion for The Wrestler in 2008.

For his new project, based on the play by Samuel D. Hunter, he has cast Brendan Fraser as a reclusive English teacher suffering from severe obesity who is trying to reconnect with his estranged daughter.

Rumoured to be set in just one room, the barebones premise of a broken down man looking for redemption feels reminiscent of The Wrestler. If it’s halfway as good, you can expect Fraser to be the bookie’s favourite when it comes to the acting prizes. His much-anticipated warts-and-all turn as a 600-pound man is already one of the main talking points of this 79th edition.

Release: TBC. The Whale heads to TIFF after Venice, so by the end of the year if we’re lucky. No trailer has been released at this time.

Todd Field’s first film in 16 years (a Terrence Malick-sized absence after 2006’s Little Children) is Tár, an account of renowned composer Lydia Tár, the first female chief conductor of a German orchestra. She is days away from recording her pivotal new piece, and trouble is looming. The central figure is played by Cate Blanchett, who is joined by Nina Hoss and Noémie Merlant. And that’s about all that’s known.

While details are scarce, the enigmatic teaser trailer which sees Blanchett blowing smoke in our faces and telling us that “time is the thing” promises a stylistically bold and intensely unnerving drama that flirts with the nightmarish and toys with the senses.

The Banshees of Inisherin

Martin McDonagh, the director of the Oscar-winning Three Billboards Outside Ebbing, Missouri, reunites with his In Bruges stars Colin Farrell and Brendan Gleeson for an absurdist tragicomedy set in 1920s western Ireland. They play two lifelong friends, Pádraic and Colm, whose relationship breaks down when one suddenly decides to cut off all ties with the other. The repercussions ripple across the small-town community and threaten to descend into violence.

This dark comedy about friendship has the potential to be something special, especially considering the on-screen chemistry both Farrell and Gleeson share, as well as McDonagh’s knack for blurring comedy and tragedy.

Another potential awards favourite premiering in Venice this year is French playwright-turned-director Florian Zeller’s follow-up to his heart-wrenching film The Father, which starred Anthony Hopkins as an aging man wrestling with dementia. The role won Hopkins another Oscar and announced Zeller as a master when it comes to an unflinching approach to challenging topics.

The Son is adapted from Zeller’s play and stars Hugh Jackman as a man whose ideal life with wife and child is disrupted by the arrival of his ex-wife and teenage son. This sounds like it could be the sort of emotionally draining chamber piece the Academy love to champion. Laura Dern, Vanessa Kirby and a returning Anthony Hopkins round off the cast.

Prepare to feel all the feelings, and if The Father was anything to go by, don’t forget the Kleenex for this one. Tearducts will be punished.

The Venice Film Festival starts on 31 August and lasts until 10 September.