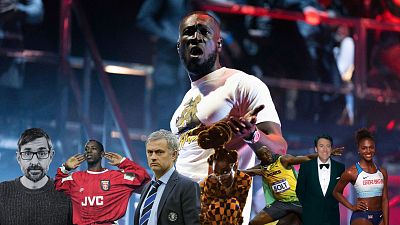 UK rapper Stormzy is back with a new song titled, 'Mel Made Me Do It', marking his first solo release in nearly three years.

With an opening line of, “I’ve been the GOAT for so long, I guess it’s not exciting when I win”, Stormzy spits for more than seven minutes with a magnetic energy and effortless flow.

Later in the track, he boasts that he’ll “do the most“, from jetting to Cannes Film Festival to headlining Reading and Leeds “like it’s easy“.

It's clear the Croydon grime rapper is back to make his legendary status known.

The title of the song is in reference to Mellisa Holdbrook-Akposoe, Stormzy's close friend and personal stylist.

The 29-year old rapper broke out into the mainstream with his highly acclaimed sophomore album 'Heavy Is The Head' in 2019, which featured the hit singles 'Vossi Bop', 'Crown' and 'Wiley Flow'.

He further cemented himself as a household name in the UK after his unforgettable performance at Glastonbury that same year.

In one scene, Usain Bolt turns on the TV whilst sat at home in his mansion, and sees the grime rapper being interviewed on a fictional talk show hosted by Jonathan Ross and Zeze Mills, alongside Louis Theroux and British sprinter Dina Asher-Smith.

In another segment of the video, Stormzy stands alongside Jose Mourinho, as they both comically perform a shush gesture, whilst the Portuguese manager's famous and heavily-memed quote, “I prefer really not to speak. If I speak, I am in big trouble", plays in the background.

Following the release of the music video, Mourinho posted a photo with Stormzy on his Instagram, captioned "Was great fun doing this cameo for Stormzy's new music video out today. I had a great time."

A tribute to Jamal Edwards

Towards the end of the video, an empowering monologue written by fellow UK lyricist, Wretch 32, and narrated by 'I May Destroy You' writer and actress, Michaela Coel, takes centre stage.

“Today, we speak about foundation. Many great Black influential giants have touched people, from soul to soul, throughout many generations."

As the monologue is delivered, a number of Black celebrities and artists, including Little Simz, Dave, Ian Wright and Malorie Blackman, appear on screen all dressed in white.

Alongside the stars walk the family of the late SBTV founder Jamal Edwards, who tragically died early this year, aged 31. They appear holding a framed photo of Edwards.

The monologue pays homage to the Windrush generation as Coel says in spoken-word style, "Let us reign in honour of the wind rushing through our veins, leaving suffering and pain."

How have lyrics been used against artists in court?