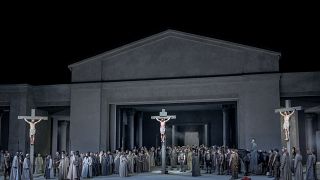 In 1633, the Bavarian small village of Oberammergau in the south of Germany was hit by the bubonic plague. In just over a month, the plague would have laid waste to 81 people, half of the village’s population.

Desperate to stop the epidemic in its tracks, the remaining villagers begged God to spare them. In exchange, they would perform a play depicting the life and death of Jesus Christ every 10 years.

And suddenly, the deaths stopped.

The Oberammergau Passion Play (Oberammergauer Passionsspiele) has become a legendary fixture of the global theatre calendar. Its 42nd edition was delayed from 2020 by the COVID-19 pandemic to run this year.

1,800 villagers take part in the huge run of performances which started on 14 May 2022 and will depart for another eight years, at least, on 2 October.

People from all over the world come to see the play. To perform in the Oberammergau Passion Play is a privilege that is only afforded to locals though. You must either be born in Oberammergau or have spent at least 20 years in the village to join the cast.

Euronews Culture spoke to Frederik Mayet, who is playing Jesus in the 2022 run. He shares the part with Rochus Rückel.

The role of a lifetime

Mayet was born in nearby Munich but spent most of his childhood in Oberammergau. He was first taken to the Passion Play in 1990. By the time the next run came around, he was performing in it.

Reviving the role 12 years on is an honour, he explains.

“I never imagined myself playing Jesus,” Mayet says. “When I was elected for the first time in 2010, I was really surprised.”

“Of course it’s a big honour. In the first moment I was really happy, but in the next few days I really felt the pressure.”

“You have so many visitors, and even the other villagers, they congratulate you but you know they’re thinking ‘we’ll see how this goes’,” Mayet laughs.

Over 500,000 people are expected to attend the Passion Play this year alone. But in his second attempt, Mayet is more confident in the role.

“Playing this role twice is something I’m really happy about. It’s not something that happens often,” he says.

Outside of his leading role in Oberammergau, Mayet is the artistic director of Münchner Volkstheater, a public theatre in Munich. His work in Munich is off-stage though. In Oberammergau, he takes centre stage, bringing the story of Jesus to life.

Jesus is something more than playing Hamlet for me

It’s a burden Mayet and the cast don’t take lightly. While the play is meant to be enjoyable to people from any background, Mayet recognises that for those who do believe in Jesus, this is more than just theatre.

“Jesus is something more than playing Hamlet for me,” Mayet says. “It has another dimension."

In preparation, the cast travelled to Israel to visit the holy sites of the passion story. But it was also important to this production to find a human quality in Jesus.

One of Mayet’s favourite scenes is the prayer at the Mount of Olives. In the Bible, Jesus cries blood and tears as he feels lonely and doesn’t know what to do.

“That’s a moment in which Jesus is depressed and has fears, even if he is the son of God,” Mayet says. “We show Jesus as a person people can connect with, as he has a very human side.”

This direction is no doubt part of the influence Christian Stückl has had on the play. Like Mayet, Stückl is from Oberammergau and also works as the artistic director and managing director of the same Munich theatre.

A passion for directing

Now 60 years old, Stückl was just 24 when he was elected as the next director of the passion plays. This is his fourth time directing.

In his first attempt, the 1990 edition, Stückl made radical changes to the script to remove antisemitic themes from the play. For the 1934 300th anniversary of the play, Adolf Hitler attended and praised the story’s anti-Jewish themes. In the following decades, Christian and Jewish critics demanded changes to the script.

Today’s play is a far cry from those problematic editions.

Mayet read the copy of the script from 1970.

“It’s so different from today,” he says. “He says ‘What I say, you won’t understand now, but perhaps you will understand it later.’ Jesus was holy in a way.”

“Now, he argues, he fights. He fights for what he wants. And the disciples ask the questions we would ask today,” Mayet says.

It’s no coincidence that 2022’s version of the play feels more prescient than ever. The Passion Play was started to stave off the bubonic plague, and this version was delayed by the COVID-19 pandemic.

“You suddenly have a new view of the text,” Mayet says. “Jesus was telling people about diseases, about illness and the weak.”

Before the play could finally go on, the war in Ukraine sparked further introspection.

“The text was the same but our work changed,” Mayet notes.

“He talks about the same problems we have today, but 2,000 years ago. He lives in a society where the rich are getting richer and the poor are getting poorer. He talks about war, about diseases, how you handle refugees, those that are at the edges of society.”

Where the play exceeds is through its ability to engage a village to create a sublime piece of theatre every decade.

“There’s something really special about the Passion Play. The way people come together. I’m pretty close with the actors of the apostles and disciples,” Mayet says. “The cast is over 1,800 people so I don’t know everyone. But after being together for such a long time you meet most of the people in the play.”

The rehearsal process starts in January and cast members are required to grow their hair and beards to the right length for the duration of the run. A long overdue haircut is one of the few things Mayet can look forward to at the play’s final curtain.

“On one hand, everyone will be a little happy when the season is finally over because they’ll be able to do things again. No one can go on holiday as everything is dedicated to the play,” Mayet shares.

“But of course, there will be a lot of tears on the last day because that’s the last performance for at least eight years. It will be a very emotional day.”