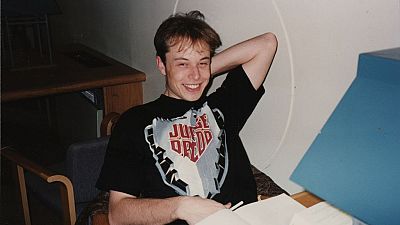 A photograph of Elon Musk during his college years that is among the items a college girlfriend is selling   -   Copyright  JENNIFER GWYNNE/RR AUCTION   -
By David Mouriquand  •  Updated: 16/09/2022

Amid the ongoing court case of Elon Musk’s bid to buy Twitter and the shareholder approval for the buyout, it has been reported by a Boston auction house that college photos of the Tesla CEO and memorabilia from his then-girlfriend have sold for $165,000 (approx. €165,033) at auction.

Gwynne told The Boston Globe she read about an auction of test papers that Musk graded and realized she had far more personal items she could sell, including candid photos, a birthday card from him and a necklace he gave her.

Musk and Gwynne dated from 1994 to 1995 when they were both at the University of Pennsylvania. They split when Musk graduated, moved to California and said he couldn’t talk on the phone because it seemed like a waste of time to him, Gwynne said.

“We broke up just before he started conquering the world,” according to Gwynne.

She and Musk have not kept in touch.

The 18 candid photos were sold individually.

Gwynne has stated that she plans to use some of the proceeds for her stepson's college education.

It’s far from the first time fans of celebrity names will part with their money for “prized” memorabilia, some stranger and more outrageously expensive than others…

Here are a few examples.

Last year, a royal fan bought a slice of Prince Charles and Princess Diana’s wedding cake for £1,850 (approx. €2,110) at auction, more than 40 years after the couple tied the knot.

The large piece of cake icing and marzipan base features a detailed, sugared design of the royal coat of arms. It was given to Moya Smith, a royal staffer, who preserved it with cling film and dated it 29 July 1981.

“It appears to be in exactly the same good condition as when originally sold,″ said Chris Albury, auctioneer and senior valuer at Dominic Winter Auctioneers. “But we advise against eating it.” Probably wise.

The gift was reportedly altered to fit North by altering the custom-made jacket to fit her proportions, Kardashian explained in an Instagram story.

Another MJ fan, Hong Kong business man Hoffman Ma, bought the singer's famous white glove in 2009 for $350,000 (approx. €351,212). The glove was worn by Jackson when he famously moonwalked on stage for the first time at the 1983 Motown 25 television special.

Judy Garland's ruby red slippers from The Wizard of Oz were reportedly listed at $6 million (approx. €6,020,790) by auction site Moments in Time. Several other pairs exist, including one pair that was stolen in 2005 and recovered by the FBI in 2018.

The was so tight-fitting, Monroe had to be sewn into it on the day of JFK's birthday party. Kim Kardashian recently wore it at this year's Met Gala, and it did not go down well...

A Kayne West fan thought it would be a good idea to Ziploc-bag some air from one of Kayne West’s album releases last year and sell it on eBay. The starting price for the sealed bag labelled “Air From Donda Drop” was $3,330.00 (approx €3,338.97).

No news on how its authenticity was verified...

Johansson stated she would sell the tissue and then give the proceeds to charity. So that's something...

After appearing on the Australian morning program Sunrise in 2012, One Direction's Niall Horan left a part of his Vegemite-covered toast on set.

At least it was sliced in triangles. That's some comfort.