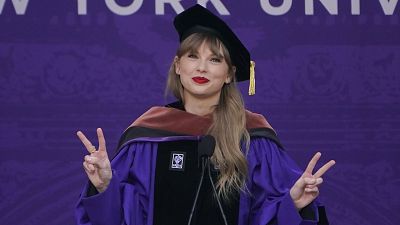 An American university has put Taylor Swift on the syllabus, comparing her songwriting to the genius work of Shakespeare and Chaucer.

University of Texas at Austin (UTA) has added a unit called The Taylor Swift Songbook to its literature units.

The unit will analyse Swift’s lyrics alongside writing and poetry by English language greats including Wyatt, Coleridge, Keats, Dickenson, and Plath.

“This course uses the songwriting of pop music icon Taylor Swift to introduce literary critical reading and research methods—basic skills for work in English literature and other humanities disciplines,” reads the UTA website.

“Focusing on Swift’s music and the cultural contexts in which it and her career are situated, we’ll consider frameworks for understanding her work, such as poetic form, style, and history. It is also an exploration of how the conventions of rather traditional poetry are alive and reworked in contemporary popular music.”

Swift rose to prominence after appearing on American Idol in the early noughties but has since become a prominent singer-songwriter with a large back catalogue.

Despite having a huge fanbase Swift has endured some controversies including a feud (although not her word for it) with Kim Kardashian and Kanye West. Lately she has struggled with a high-profile dispute with her former record label Big Machine Records over the rights to her music.

Why are UTA providing a Taylor Swift module?

The course will be available from this autumn and will be taught by Chaucer expert Elizabeth Scala.

Scala cites inspiration from her daughters’ enjoyment of Swift’s music while doing lockdown home study as the reason she designed the course.

“I am sneaking in a bunch of canonical literature,” Scala said in an interview on BBC Radio 4.

“I’m looking at the strategies that Taylor Swift uses in her songwriting that draw on a larger literary tradition that precedes her.”

Students will study the Swift albums ‘Red (Taylor’s version),’ ‘Folklore,’ and ‘Evermore’ on the unit.

Scala cited ‘All Too Well’ which is allegedly about Swift’s breakup with Jake Gyllenhaal as an example of Swift’s emotional songwriting ability.

“She brings up places and especially objects that take us right into the emotional and narrative heart of what she’s talking about in very few words.

“It evokes this sense of a new love.”

New York University (NYU) already offers a unit based on Swift’s work as a music entrepreneur. The institution gave Swift an honorary doctorate earlier this year.