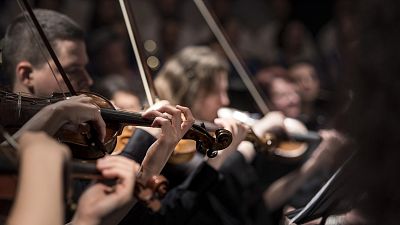 With today's release of the album 'TikTok Classics', a collection of 18 hits propelled into the mainstream by the social media platform and reworked with a classical orchestra, Euronews Culture dives into the tracklist and talks with the Head of Music Operations DE at TikTok...

If any of these phrases mean anything to you, it’s probably because you’ve been sucked into the astonishingly addictive world of TikTok music.

Anyone who’s spent more than a few minutes scrolling through TikTok will have noticed there is a reliable selection of musical backdrops to match the broad range of videos posted.

The world’s biggest new social media platform hasn’t just propelled thousands of its users to viral stardom, it’s also provided huge momentum for music that might have passed people by.

To celebrate some of the most successful songs, TikTok have selected 18 hits, teamed up with the artists, Warner Classics and a German orchestra, to create a classical album.

Each song on 'Tik Tok Classics' has had a classical arrangement composed and performed by the Babelsberg Film Orchestra of Germany.

Six singles were released ahead of the full album, which is out today, Friday 12 August.

Ahead of the album launch, Euronews Culture gave the album a listen and sat down with Michael Kümmerle, Head of Music Operations DE at TikTok, to discuss it.

Some of the more iconic songs, like the “Oh No” clip that originated with a sample from "Remember (Walking in the Sand)" by 60s girl group The Shangri-Las, have been transformed completely from their source material.

Now, "Oh No" is an imposing, dread-laden soundscape with a staccato electric beat matched by both crescendoing and waning strings.

The song “Levitating”, a charming acoustic cover of Dua Lipa’s 2020 hit by Allie Sherlock, has been transformed back into the disco hit original with the extra punch of an orchestra taking it to another level.

The track most suited to a classical overhaul is the "Wellerman Sea Shanty", performed by Nina Sofie. Now with strings sawing away at the melody, it leaves behind its a cappella origins and sounds more like something out of Pirates of the Caribbean. It’s truly epic.

As some songs feel more bombastic, others go down the humorous route. “Bongo Cha Cha Cha” by Emma Muscat makes use of the orchestra’s percussion to give it a cabaret charm.

And of course, the album is completed by Millie B’s teenage grime classic “M to the B”. The diss track written by Millie B when she was 16 is even more charmingly vicious when backed by the strings, horns and percussion.

"M to the B" became one of the most famous TikTok songs after Bella Poarch mimed along to it in the most liked video on the platform.

As Millie B raps “Your bars are fake and my bars are real / Is it true you got bummed on a field?”, the decision to pair her with the Babelsberg Film Orchestra of Germany is nothing short of inspired.

“Our creators and music artists are at the heart of everything we do,” says Kümmerle.

“As the album progressed, we were actually overwhelmed by the consistently positive response from the original artists: Alice Merton for instance said that listening to her song "No Roots" in a new musical context is inspiring - and the fact that we have the original artists on the album for half of the tracks - for example, AURORA ("Runaway") and Tion Wayne ("Body") - shows that the concept is convincing,” he continues.

But why did TikTok decide it’s time to make the album?

As classical music also gets increasingly used in viral videos, it seems to be a trend worth plugging into, according to Kümmerle.

“Music and TikTok are continuing to reshape popular culture. So, with 'TikTok Classics', we wanted to celebrate the most popular sounds on the platform by giving them a new classical twist, whilst also inviting new listeners to join the thriving community on the platform,” he says.

“The new songs have been embraced by the TikTok community and, by bringing together the worlds of classical and pop music, we can reach existing fans and tap into new audiences across different genres with a style that some may not initially associate with TikTok. With 'TikTok Classics', the community can rediscover these celebrated hits in a new way, and we can't wait to see how they use these sounds on the platform,” Kümmerle concludes.