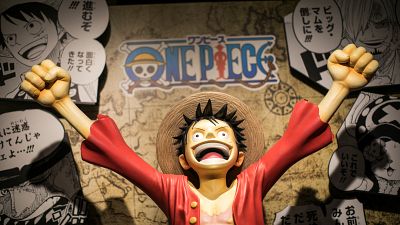 One Piece anime character Monkey D. Luffy, known as Straw Hat, is displayed at a Jump shop during a press preview in Tokyo on November 19, 2019   -   Copyright  BEHROUZ MEHRI/AFP or licensors
By Jonny Walfisz  with AFP  •  Updated: 22/07/2022

One Piece is celebrating its 25th anniversary. The best selling manga series of all time is also now entering into its final saga.

It’s one of the longest running mangas, and is by far the best selling of all. One Piece was created by Eiichiro Oda and follows the tale of Monkey D. Luffy, a boy with his pirate crew on the hunt for the ‘One Piece’ treasure in order to become king of pirates.

The series’ popularity is considered to be a big part of manga's global popularity today.

Alongside the manga, there has also been an incredibly popular anime series following the course of the characters. An upcoming live-action Netflix series is expected to boost the popularity of the show even more.

“One Piece is an important piece of literature because it's inspired a lot of mangakas [manga artists] who have created great stories to get drawing,” Paul Davies, a British fan says.

“Continuously pushing limits on the anime and also the manga, I think without One Piece, anime and manga wouldn't be as prolific as they are today,” he added.

Paul also emphasised the value it brought by getting him more into reading. “I never picked up books before I started reading One Piece,” he says. “But because I watched the anime I thought it was cool.”

One Piece will become a hallmark of epic literature

"I genuinely believe One Piece will become a hallmark of epic literature, in the same vein as the Odyssey or the Lord of the Rings. The depth, detail and internal coherence of the universe Oda has created is baffling, as it effortlessly mixes cartoonish absurdism with tragedy, pathos and social commentary," explains Dutch-Irish fan, Roeland Doherty.

"It's a story that could only work over many, many years of telling, as it was designed as an epic from the get-go," he added. "The passion and dedication Oda has to this world, these characters is apparent in every panel, yet he never takes himself or his creation too seriously."

"It's a story that I enjoyed as a child, and whose brilliance has slowly unveiled itself to me. Its humour, action and deep poignancy are second-to-none, but it is the impossibly rich universe that is its defining feature," Roeland says.

“What makes this manga so special is first and foremost the script,” says Ryuji Kochi, president of Europe, Middle East and Africa at Toei Animation, the Japanese company that has produced the animated series since 1999.

The series covers a broad range of themes, from over-industrialisation, racism, slavery and geopolitical issues, all while traversing geographical and historical settings, from Ancient Egypt to Medieval Japan.

To celebrate the 25th anniversary of the manga, One Piece has announced “One Piece Day”, a worldwide streaming event across 22nd and 23rd of July.

／
Calling all One Piece fans!
The ultimate festival is set to start!
＼

Manga, anime, movies, games...
Everything One Piece is here!

Get the scoop! See you soon!#ONEPIECE#ONEPIECEDAYpic.twitter.com/uAavZuP093

The festival is expected to bring news of the upcoming final saga in the long-running manga.

Oda has already explained to fans that there will be a one month hiatus from publishing the series as he prepares the details of the final adventure.

With that hiatus nearly at its end, fans are excited to start reading the conclusion of Luffy’s 25 year long story when chapter 1,054 is released.

“I will start to introduce all the secrets of this world that I have kept hidden,” Oda said. It will be fun. Please buckle up.”

"It's hard to believe that One Piece has been around for 25 years, but... at the same time easy," Canadian fan Taylor Blades says.

"Oda-san has created an incredible world that you keep wanting to come back to - time and time again. The Mugiwara Pirates will always live rent-free in my mind, alongside all the other characters we've been introduced to along the way. To say that I'm excited for the last instalment in this epic tale would be an understatement."

Manga fan Jamie-Lee to sing for Germany at Eurovision Contest