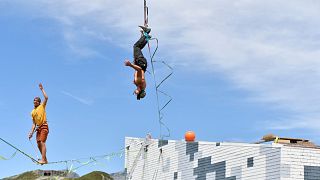 Highlining is a slackline discipline that is practiced at great heights, usually between rock formations, canyons and buildings.

But the sport is not as dangerous as it looks - careful measures are taken to ensure maximum safety, including a harness attached to the main slackline, which athletes wear around their waist.

At an altitude of 2252 meters on the Crap Sogn Gion, 31 athletes from all over the world competed in a number of insane gravity-defying events, including Speedline and Freestyle categories.

The Speedline event at the Swiss World Championships involved athletes racing against each other across a 100-metre line.

The 27-year-old Frenchman Benoit Brume won the speed contest in a rapid 40.61 seconds.

"This one is the first big World Championship of Slackline and I really wanted win it and I trained for it and I feel really happy about that," said Brume, shortly after winning the event.

In Highline Freestyle, the goal is to do all kinds of dynamic tricks and combos on the line.

France's Louise Lenoble won the women's Freestyle competition in spectacular fashion after performing a "Front Almighty Flip", a standing turn around the highline in which she holds on to the highline with her feet.

In the men's competition, the United States' Davis Hermes pulled off "The Holy Grail" of tricks, a double forward turn around the high line, to win the title.

Check out the video above to witness this insane competition