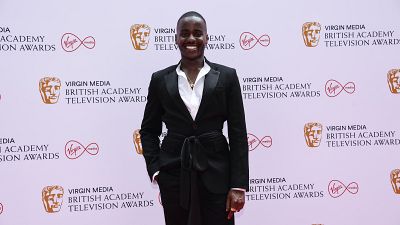 British actor Ncuti Gatwa, who made a name for himself in the Netflix hit series 'Sex Education,’ will become the first black actor to play the lead character in the BBC's cult science fiction series "Doctor Who," the British television channel announced on Sunday.

The 29-year-old actor who was born in Rwanda and raised in Scotland will become the 14th Time Lord in 2023, when the series celebrates its 60th anniversary.

He will be succeeding British actress Jodie Whittaker, who was the first woman to play the galaxy-hopping, extraterrestrial character who regenerates into new bodies.

“This role and show mean so much to so many around the world, including myself,” Ncuti Gatwa said in a press release, “and each one of my incredibly talented predecessors has handled that unique responsibility and privilege with the utmost care. I will endeavour my utmost to do the same.”

Jodie Whittaker herself had taken over in 2017 from Scottish actor Peter Capaldi before announcing her departure in July 2021.

Who is Ncuti Gatwa?

Star of stage and screen Gatwa, whose first name is pronounced 'SHOO-tee, is best known for his critically-acclaimed performance in ‘Sex Education’ as the iconic Eric Effiong.

He was awarded Best Actor award at the Scottish BAFTAs in 2020 as well as numerous nominations, including Best Male Comedy Performance at this year’s British Academy Television Awards in London.

“There aren’t quite the words to describe how I’m feeling,” he declared this weekend on the BAFTA ceremony red carpet. “A mix of deeply honoured, beyond excited and of course a little bit scared. Unlike the Doctor, I may only have one heart, but I am giving it all to this show.”

The news finally becoming official was a relief for the actor who could finally reveal the big secret he has been keeping since February.

Gatwa’s acting career started in 2014 in 'Bob Servant', a sitcom based in Dundee, Scotland, where he played a brief role.

The public may have also seen him in the BBC miniseries ‘Stonemouth’, or at Shakespeare’s Globe theatre playing Midsummer Night’s Dream’s Demetrius in 2016.

Doctor Who, an emblematic role

The original run of ‘Doctor Who’ spanned 1963 to 1989. Since the show was revived in 2005, the Doctor has been played by Christopher Eccleston, David Tennant and Matt Smith, in addition to Capaldi and Whittaker.

Other stars, like Karen Gillan and Billie Piper, have made their names on the show as the Doctor's “companion.”

"Sometimes talent walks through the door and it’s so bright and bold and brilliant, I just stand back in awe and thank my lucky stars," returning showrunner Russell T Davies said in the broadcaster's release.

“Ncuti dazzled us, seized hold of the Doctor and owned those TARDIS keys in seconds.”

In addition to seeing the start of Gatwa's tenure, next year also marks Davies' return to “Doctor Who” after more than a decade's absence.

“Russell T Davies is almost as iconic as the Doctor himself and being able to work with him is a dream come true,” Gatwa said.

The writer and producer ran the reboot until 2009, and has worked on shows like “A Very English Scandal” and “It's A Sin” in the interim. Speaking to The Associated Press, Davies promised a “spectacular” 2023.

Although still popular, in recent years the series has seen its ratings dwindle, particularly in the UK, according to specialised media CosmicBookNews.