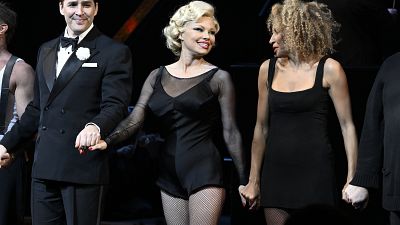 The crowd cheered on Tuesday as Pamela Anderson took to the stage of the Ambassador Theatre, New York to play Roxie Hart in the hit musical ‘Chicago,’ now in its 25th year on Broadway.

Of late, Anderson has been busy supporting whistleblower Julian Assange as well as being the subject of a biopic on the topic of her infamous sex tape, but in stepping into the role of Roxie she joins a long line of stunt castings for the show.

The role of Billy Flynn has likewise been filled by celebs with David Hasselhoff and Jerry Springer both treading the boards as Roxie Hart’s slippery lawyer.

But beyond ‘Chicago’ stunt casting, the practice of bringing in celebrities to sell tickets and get bums on seats is less widespread - but it does happen.

So whether you think it’s a hacky money-making practice or an unpretentious and refreshing move, let's take a look at some of the best and worst (they’re mainly bad) examples of stunt casting.

The ‘Evita’ revival of the 2010s was a box-office hit and retold the story of Eva Peron, wife of Argentine dictator Juan Peron.

In the rerun of the Tim Rice and Andrew Lloyd-Webber musical Martin played the narrator, Che, a representation of revolutionary Che Guevara, who guides the audiences through Eva Peron’s life.

However, the ‘Livin da Vida Loca’ singer was panned by critics, with the Washington Post saying Martin’s signature charm was ‘misapplied’ as the voice of the masses and Vulture saying his everyman was ‘too everyman’.

In the role that made Noel Coward an overnight star in the 1920s, Will Young was thought to be a shoo-in, or at least that his casting would raise the profile of the show.

‘Vortex,’ the convoluted family–cum-romance drama which follows the fortunes of a mother and son in post-WW1 Britain, was onstage at the Royal Exchange, Manchester, six years after Young won Pop Idol in the UK. However, the ‘Evergreen’ singer’s performance was judged harshly due to his lack of experience and doe-eyed persona.

Young’s turn as the drug-addicted, sexually confused Nicky was critiqued by the Guardian as ‘little boy lost,’ with scorn heaped on the producer for his casting.

The timeless and relatable classic fairytale of a woman who marries a man for his money and then is unfairly lumbered with his daughter after his death (ok maybe that isn’t the moral of the story) was made into a musical in 1957 by Rodgers and Hammerstein.

The 1950s original starred none other than Julie Andrews but the revamp’s leading ladies were Carly Rae Jepson and Fran Drescher.

Sadly, Drescher, the hive-of-bees voiced star of ‘The Nanny,’ displeased critics and audiences with her larger- than-life interpretation of the evil stepmother, with the LA Times saying Drescher’s “voice sounds completely hoarse and her gestures empty and overblown.”

Rosie O’Donnell, Fiddler on the Roof

‘Fiddler on the Roof’ is a timeless family drama set in an impoverished Jewish community in Imperial Russia.

In today’s climate, it may seem odd to have Irish New Yorker O’Donnell playing Jewish matriarch Golde, but 2005 was a simpler time.

Although O’Donnell is now probably most well-known for her feud with former (and possible future) president Donald Trump, in the early noughties she was a well-loved TV personality and film star.

Although O’Donnell’s performance wasn’t quite beyond the Pale (get it?) reviewers didn’t take kindly to her attempt at a Yiddish accent whilst nonetheless observing she appeared to be enjoying herself.

The story of a lounge singer who gets in with the wrong crowd and is forced into witness protection at a convent may sound absolutely ludicrous, but it made a surprisingly good film, with the potentially inevitable follow-up musical equally popular.

‘Sister Act,’ produced by the original star of the film Whoopi Goldberg, ran for a year before Raven-Symoné was brought in to play lounge singer Deloris Van Cartier. Raven-Symoné a well-known sitcom actress who would go on to co-host daytime talk show ‘The View’ with Goldberg, made her Broadway debut in the role to rave reviews.

Fans enjoyed her stage presence and the Village Voice said Raven-Symoné was ‘fun’ in the role.

Daniel Radcliffe, How to Succeed in Business Without Really Trying

Having shown his chops (and everything else) in his star turn in ‘Equus’ Radcliffe became a well-known stage presence on Broadway.

However, after playing the world’s favourite villain-vanquishing wizard from the tender age of 12, it is perhaps a surprising move to cast Radcliffe in such an unlikeable role as J. Pierrepont Finch in ‘How to Succeed in Business’.

The boy-who-lived received ambivalent reviews for his turn as the scheming corporate shill, with his likeable stage presence winning favour but performance skills drawing a few blanks. The New York Times gave him a 6/10 for the role.

Pamela Anderson will perform in Chicago for 8 weeks only through June 5th at the Ambassador Theatre.

The gay Muslim artist representing Montenegro at the Venice Biennale