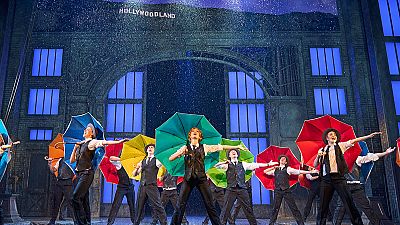 It’s the 70th anniversary of the release of “Singin' in the Rain”, one of the most iconic musicals of all time.

Directed by and starring the one and only Gene Kelly, Singin' in the Rain remains one of the most enduringly loved musicals to hit Hollywood screens.

Just say the name and people are liable to start humming the title-song’s tune. It’s that infectious.

On stage and screen

Since the film’s debut in 1952, it has remained in critics’ lists as one of the best movies of all time and has inspired a stage adaptation that has toured the US and the UK.

In the current stage adaptation, which is touring the UK and had an extended run at the Sadlers Wells Theatre in London, the iconic Singin' in the Rain scene uses a record-breaking 6,000 litres of water. It guarantees a splash zone for the front row seats at least.

“I’ve always been such a fan of movies from that era, when the opportunity came to play Kathy, I jumped at it,” she commented, noting the timelessness of the original film.

“You find that in your mind, that iconic image of Gene Kelly swinging around with an umbrella - because who really sings and dances in the rain? - there’s something so escapist and magical about it. It just sticks with everyone,” she says.

“Those images and that music, you never forget it.”

The film is famous for its all singing all dancing numbers that pushed actors Gene Kelly, Donald O’Connor and Debbie Reynolds to the limit. However, while Kelly and O’Connor were seasoned dancers, Reynolds had never danced before.

“Debbie Reynolds was so perfect for the role that Gene Kelly said he’d teach her to dance,” Gooch explains.

“It was so difficult for her and because they filmed the “Good Morning” scene over 40 times, she ended up with her feet bleeding inside her tap shoes.”

“But you’d never know it because watching her she is perfect. They were big shoes to step into,” Gooch says, reflecting on her part’s original actor.

Debbie Reynolds herself said of the part: “The two hardest things I ever did in my life are childbirth and Singin’ in the Rain.”

Originally conceived as a way of showcasing producer Arthur Freed’s established back-catalogue of songs, the film was a rarity at the time as a musical that wasn’t originally based on a Broadway hit.

Although it wasn’t immediately a runaway success at the box-office with modest ticket sales, the film has wormed its way into everyone’s hearts.

“Even when I watch it back now, my reaction always stays the same,” Gooch says. “I love the escapism, the romance, the showbiz, and the heartbreak. There’s a storyline for everyone and for any era.”

In her book, “The Movie Musical!” Jeanine Basinger agrees. “Love it or hate it (and few hate it), overrate it or underrate it, the 1952 film makes a perfect musical yardstick.”