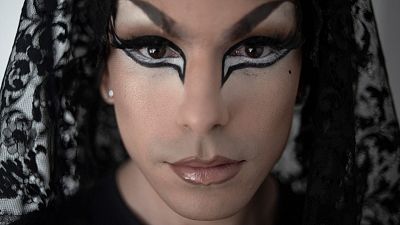 Gay stylists have long played a key role in dressing the Virgin Mary figures carried through the streets of southern Spain during Holy Week   -   Copyright  AFP   -
By AFP  •  Updated: 08/04/2022

Working with rich fabrics, fine lace and flowers, gay stylists have long played a quiet but pivotal role in dressing the Virgin Mary figures carried through the streets of southern Spain during Semana Santa, or Holy Week.

But their participation in this week of religious processions which marks the peak of the Catholic calendar comes at a price: silence about their sexual orientation.

And it's a compromise that is making them increasingly uncomfortable.

"Seville's Holy Week is a contemporary festival dating back to the end of the 19th century and the gay community has been involved since the very beginning," says Rafael Caceres, an anthropology expert at Pablo Olavide University in the southern city of Seville.

The Andalusian capital is a hive of activity ahead of Holy Week, which starts on Palm Sunday on April 10 and culminates on Easter Day when Christians remember the death and resurrection of Jesus.

Many thousands throng the streets to watch life-sized models of the Virgin Mary and Christ carried through their locality by different 'brotherhoods' religious associations.

The figures are painstakingly dressed and adorned by volunteers at religious associations.

Pedro Pablo Perez Ochavo of Seville's Ichtys Cristians LGBT+H, which lobbies for equality within the Catholic Church, said there were always "florists, embroidery specialists, jewellers, stylists" who worked together on the Virgin Mary figures - and "almost all of them are gay".

A path to integration

Carlos Carvento, a 26-year-old dancer and drag queen from Cordoba, said that even within their religious associations, gay men could usually find "a way to fit in", and one in which "their artistic work and persona is valued".

Others agreed the Church tended to adopt a laissez-faire attitude, within reason. "Acceptance," Caceres said, "is based on [the idea] that a person can be a Virgin-dresser, and gay, but he wouldn't say it. As long as his public life is reasonably discreet so it doesn't tarnish the brotherhood."

This is a difficult line to tow, though. Oil sector businessman and brotherhood founder Antonio Munoz Tapia, who lives near Cordoba, began to have problems after marrying his partner David in 2016.

People stopped inviting him to give the opening Holy Week speech in his village, and recently the Church printed its annual magazine for the brotherhoods pointedly without an article he had penned on the LBGT community.

"If you don't have a partner, if you live alone and keep quiet as I did, they don't cause you any problems," the 50-year-old said. "I just don't understand this Pharisee-like attitude - that we're good enough for the brotherhoods but not good enough to deserve the same rights."

Seville's archdiocese recently confirmed it had no internal register which specified participants' sexual identity. In a statement, it asserted: "Anyone who wants to deeply experience Holy Week in Seville can do so without any problem".

However, diocesan rules say leading brotherhoods or religious organisations must "stand out for their Christian lifestyle in their personal life, their family life and in society".

Jose Victor Rodriguez and Jose Luis Medina, two fashion designers respectively known as "Victorio" and "Lucchino", got married in 2007. Shortly afterwards, a Seville newspaper published a letter criticising the fact they were allowed to dress the Holy Week virgins.

"We've led a life that's more upright and moral than many other people," Medina said, describing the letter as a "despicable" attack.

Lady Gaga vs Our Lady of Sorrows

His picture on Instagram was initially taken down following several complaints. Later, the company backtracked. He declared: "They often say that [the gay community] is taking over. But I'm not taking over anything, because it's mine too!"

During Holy Week, dozens of different Virgin Marys are paraded through the streets. Of these Our Lady of Sorrows, Our Lady of Mount Carmel, Our Lady of the Broom and the Virgin of Macarena's Hope known to be favourites among the gay community.

"You might have a gay fan of Lady Gaga or of Rosalia in Barcelona," Carvento says, "but here, we're fans of the Virgin of la Macarena or the Glorious Ascension, or Our Lady of Sorrows."

Meet the French street artist spraying the walls of Kyiv