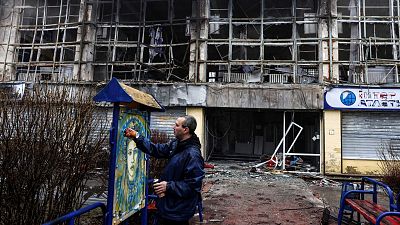 Paris-based graffiti legend C215 puts the final touches on a blue and yellow portrait of a young girl on a Kyiv bus shelter, a colourful contrast with the badly damaged buildings nearby.

"It's a sign of support," the energetic 48-year-old explains, spray can in hand. "If this can bring a little smile or a bit of humanity in a difficult situation, then I'm satisfied."

One of France's leading street artists, C215 - whose real name is Christian Guemy - travelled to Ukraine to tag the country's walls with images of peace and innocence in a time of brutal war.

After the Russian invasion, the one-time Banksy collaborator did a huge mural of the same girl in the colours of the Ukrainian flag covering the side of a Paris apartment block.

But despite the dangers C215 felt he "had no choice" but to come to Ukraine itself, after meeting Ukrainians and wondering for several days what more he could do to help.

"I didn't really decide to come to Kyiv, it was more that my paintings decided for me," he told AFP last week, as Kyiv residents stopped and took pictures of him at work.

A symbol of support

C215's own journey began with a traumatic upbringing, born in a tough Paris suburb to a teenage mother who killed herself, and then a painful break-up that caused him to sink into depression.

After the split, he gave up his job to start doing graffiti, stencilling his daughter's portrait to "channel my depression" and developing his technique of cutting out faces in card then spray-painting them.

That technique can now be seen in several places around Kyiv, including one on a rusty signboard near the city's TV tower that was targeted in a deadly Russian missile strike on March 2 which killed five people.

Another picture of a girl is stencilled on an abandoned tram near a checkpoint, painted in the same faded red and cream colours as the carriage.

He has also tagged walls in the western city of Lviv, where a huge missile struck an oil depot during his time there, and in the central town of Zhytomyr.

The imagery of childhood that haunts his work - he has said his work was "too French, too tragic" to continue his Banksy collaboration - is clear in all his Ukrainian works.

"A child is innocent, a child doesn't have to cope with war, and in this war there are millions of mothers and children that are spread all over Europe," he said.

Walking off into the rain, C215 says he is returning to France soon but will definitely be coming back to Kyiv.

The reaction from Ukrainians themselves has been "super - that is what makes me happy".