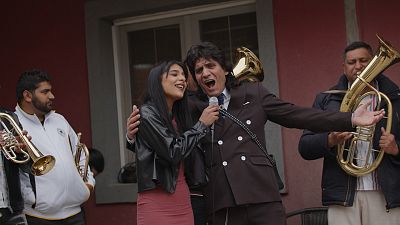 At the end of April, the unique world of Balkan Trafik returns to Belgium for its 2022 edition.

Ahead of the festival, Euronews took to the road in Serbia, to meet some of the artists and music that will feature this year, including the unmistakable sound of Gypsy brass bands. The Roma community has left its indelible mark on the region, most notably when it comes to celebratory events, like weddings and funerals.

Balkan Trafik tries to uncover artists and musicians from a largely unknown part of southeastern Europe, which for some, still seems very far away.

At Balkan Trafik this year, several internationally renowned groups will perform, including the Kadrievi Orkestar, from Northern Macedonia.

"We are Roma, proud to sing in all languages: Romanian, Serbian, Macedonian songs. We are a family and very proud to play at Balkan Trafik as Kadrievi Orkestar," said singer Rufat Selim Rocky

"We became known all over the world by playing Goran Bregović's music for Emir Kusturica's 'Time of the Gypsies', and we are the fifth generation of musicians," musician Masar Jarasov-Kadriev told Euronews.

In the Balkans, a brass orchestra’s job is not only to make music but also to bring madness!

Renowned trumpet player Goran Bregović is on the bill at this year's Balkan Trafik. Euronews met him at his home in Belgrade to chat a little about his cultural and musical influences.

"Every art is a mixture. It is an inevitable thing, especially if you were born here where for five centuries there was a border between Orthodox, Catholic, and Muslim. In addition, the Gypsy sound, mixes the whole thing well.

"As a composer, I am already with this musical "Frankenstein"! In the Balkans, a brass orchestra’s job is not only to make music but also to bring madness! See you in Brussels!" Bregović said.

Roma rap group Pretty Loud, will also be in the Belgium capital. Possibly the world’s first all-Roma female hip-hop group, its members use lyrics to fight for Roma women’s rights and gender equality. The group’s growing acclaim led to them recently being featured in the New York Times.

"Patriarchy is still there [in the] Roma community but the young Roma generation wants changes, and we are one of them. We want changes, and that every woman to be independent and to make decisions on their own," singer Silvia Sinani said.

Another group set to take the stage is **Balkan Jazzovic.**Specially formed for the festival, it includes some of the best jazz artists from both Belgium and the Balkans.

Balkan Trafik runs from April 28th until May 1st.