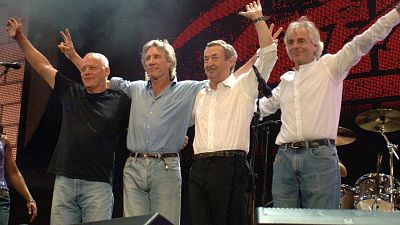 Two members of legendary English rock band Pink Floyd have teamed up to release their first new music in almost three decades to raise money for humanitarian aid for Ukraine.

Hey, Hey, Rise Up is a partnership between drummer Nick Mason and guitarist and vocalist David Gilmour, who joined the band a little after its formation in 1967, as well as Ukrainian singer Andriy Khlyvnyuk of the band BoomBox. Roger Waters, who left Pink Floyd in the 1980s, is not involved.

Khlyvnyuk cut off a tour of the US and came home after Russia invaded Ukraine on February 24. A few days later he recorded a clip of himself singing a patriotic Ukrainian song, The Red Viburnum in the Meadow, in front of Kyiv's St. Sophia Cathedral.

The clip and song, which made waves on social media, are a focal point of Hey Hey, Rise Up. It was written while Khlyvnyuk was in hospital recovering from a shrapnel injury.

The accompanying music video is also interspersed with footage of Ukrainian citizens in bomb shelters, and bidding each other heart-wrenching farewells as they prepare to leave the country.

Gilmour, who previously performed with BoomBox in London in 2015, said the video was "a powerful moment that made me want to put it to music".

While Khlyvnyuk was convalescing, he said, "I played him a little bit of the song down the phone and he gave me his blessing. We both hope to do something together in person in the future."

Proceeds from the track will go to the Ukraine Humanitarian Relief Fund. Gilmour added: "We want to express our support for Ukraine, and in that way, show that most of the world thinks it's totally wrong for a superpower to invade the independent, democratic country that Ukraine has become."