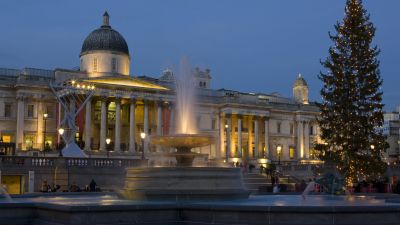 The National Gallery in London has changed the title of one of its paintings to reflect its true Ukrainian heritage.

The painting by French impressionist artist Edgar Degas had been listed as ‘Russian Dancers’. It is not currently on display in the gallery.

Featuring some of Degas’ classic pastel work, the dancers are illuminated with highlights of yellow and blue, representative of the national flag of Ukraine. Degas created the work around 1899 after witnessing a Ukrainian dance troupe in Paris.

Tanya Kolotusha, a Ukrainian in London posted on Instagram that after the war began, the painting had been on her mind.

“I kept thinking about this particular piece. The thing is that the dancers are not Russian and never were. They are Ukrainian dancers depicted by a great French impressionist,” she wrote.

“Russia/Russians were and are still appropriating many elements of Ukrainian culture. One of the reasons the Kremlin and their dictator invaded my country is a desire to own a history of Kyivan Rus! Should we wait for Ukraine to win the war before starting a grand change on the cultural front? I thought so.”

After a review, the National Gallery opted to change the name.

“The title of this painting has been an ongoing point of discussion for many years and is covered in scholarly literature; however there has been an increased focus on it over the past month due to the current situation so therefore we felt it was an appropriate moment to update the painting’s title to better reflect the subject of the painting,” a spokesperson said.

Speaking to The Guardian, Mariia Kashchenko, the founder and director of Art Unit explained that although it is understandable how ‘Russian’ became an umbrella term for many different nations, the war on Ukraine has made it important to make clearer distinctions.

“As a Ukrainian person, in the past I would have encountered times when I was called Russian, or where Ukrainian heritage was described as Russian,” she said.

With the Russian war motivated in part by a perception that Ukraine is just a part of Russia and not a distinct country, Olesya Khromeychuk, the director of the Ukrainian Institute in London, wrote in Der Spiegel on separating identities that have been historically subsumed by the Russian moniker.

“Every trip to a gallery or museum in London with exhibits on art or cinema from the USSR reveals deliberate or just lazy misinterpretation of the region as one endless Russia; much like the current president of the Russian Federation would like to see it,” she wrote.

“The curators have no problem presenting Jewish, Belarusian or Ukrainian art and artists as Russian. On a rare occasion when a Ukrainian is not presented as Russian, he or she might be presented as ‘Ukrainian-born’, as was the case with the film director, Oleksandr Dovzhenko, in one of the major exhibitions on revolutionary art in London.”

The National Gallery has stated that it plans to further review its catalogue and update it when new information comes to light.

'Be loud and yell about everything': Ukraine's musicians speak out