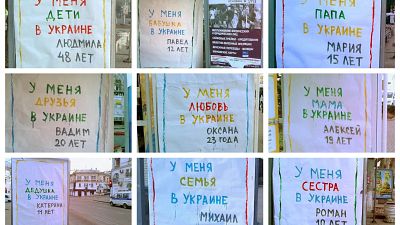 Update 28 March 2022: Euronews has found out that this project was actually created in 2014 after the annexation of Crimea and not after Russia’s invasion of Ukraine in February 2022. The artist claims that the project is still relevant today.

An artist in Crimea has created a guerilla art project to highlight the close interpersonal connections between people in the region and Ukraine.

Crimea was illegally annexed in 2014 by Russian-backed forces.

Antik Danov - a pseudonym the artist uses - has curated handwritten posters with messages that could be from everyday Crimea residents.

"I have a mother in Ukraine. Alexy, 19" says one of the posters, with text that drips down the paper like tears.

The posters started appearing in recent days as Russian troops invaded Ukraine, hung on bus stop boards for just a few hours before they get torn down.

But pictures of the art installation have been widely shared on social media.

"This series is important to me and my whole entourage, it's essentially about family entanglements."

The pop-up art exhibit had ten posters in total, which were put up covertly overnight. By the next evening, only one poster remained.

"We are all bound by family, relatives and friends. But we are all included today in a war where people are suffering and dying on both sides - our families, relatives, friends" says Antik Danov.

"It is a terrible thing. I believe it is necessary for everyone to come to their senses, to take to the streets and squares to protest, to stop the war as a matter of urgency."

Danov prefers to keep his real identity, even the city where he works, a secret over safety concerns.

"I have been out on the street for years and I told myself that I'm ready, whatever happens. But I'm not ready just to walk into their clutches. I try to stay on the safe side," the artist explained.

Antik Danov doesn't consider himself a criminal but says creativity is his language and how he expresses and processes the events happening around him.

"I do them because I cannot afford not to. I have tried and wanted to step back from being creative, but I always come back to it eventually."