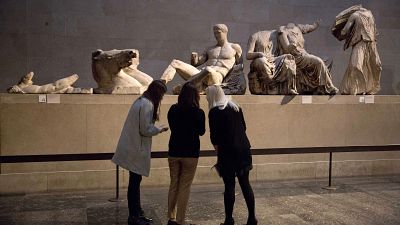 Greece has long petitioned the British Government for the return of the Parthenon Marbles, known as the 'Elgin Marbles' in the UK   -   Copyright  Matt Dunham/AP
By Tim Gallagher  with AP  •  Updated: 10/02/2022

An ancient Greek statue has been leant to an Italian museum in the latest round of ‘statue diplomacy’.

The statue of the goddess Athena will be displayed in a Sicilian museum for four years in return for Italy's long-term loan to Athens of a fragment of the celebrated Parthenon Sculptures.

The late 5th century B.C. headless marble work was discovered during excavations near the Parthenon Temple, dedicated to Athena, goddess of wisdom, on the Acropolis and belongs to the Acropolis Museum.

Greek Culture Minister Lina Mendoni, who travelled to Palermo's A. Salinas Archaeological Museum for the handover, said the gesture "reciprocates the generosity" of the Italian institution that sent the fragment to Greece last month. Theoretically, it will stay in Athens for a maximum of eight years but the ultimate aim, Italian and Greek officials say, is its "indefinite return" to Athens.

The Greek government vs the British Museum

Greece hopes the loan of the small Italian fragment — part of a 160-metre-long (520-foot) frieze that ran around the outer walls of the Parthenon — will boost its campaign for the return from London of the British Museum's part of the Parthenon Sculptures.

About half the surviving 5th century B.C. works were removed in the early 19th century by a British diplomat, Lord Elgin, and remain in London despite repeated Greek requests for their repatriation.

Mendoni described the works in London as "the proceeds of theft" by Elgin.

"Greece recognises no rights of ownership or possession" to the works by the British Museum, she said. "(The deal with Italy) indicates the path that London can follow."

The London museum says the sculptures were legitimately acquired by Elgin from Turkish authorities when Greece was still under occupation by the Ottoman Empire.

The statue of Athena will be displayed in Italy until 2026, when it will be replaced by an 8th century B.C. Greek vase, again on loan for four years.