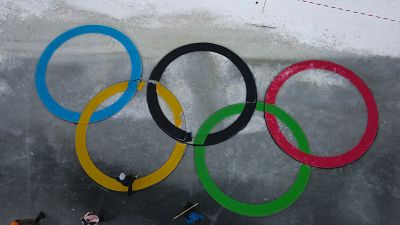 Olympic Rings made out of rotating ice carousels were created, in support of the Finnish Olympic team   -   Copyright  Alessandro Rampazzo/AFP   -
By Theo Farrant  & AFP  •  Updated: 28/01/2022

The Finish inventor Janne Käpylehto has built giant ice carousels in the shape of the Olympic rings on a frozen lake in Pajulahti, Finland.

The spinning work of art was designed to encourage the national Finnish athletes ahead of the Beijing 2022 Winter Olympics Games.

Käpylehto was helped by Finnish Olympic and Paralympic athletes to complete his vision.

The inventor originally intended to complete the project in 2017 however, he did "not have permission from the International Olympic Committee to use the logo".

"But a few weeks ago I got a call from Switzerland saying, 'Hey this is cool a cool thing, you can use the logo'," explained Käpylehto.

Previous projects of Käpylehto include building the world's largest ice carousel at the time, which he created in Little Falls, Minnesota in early 2019.

In 2021, Käpylehto's team beat their own record by building an even larger ice carousel into Lake Lappajärvi in Finland.