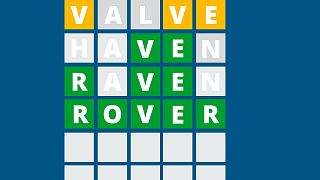 Everyone seems to suddenly be playing Wordle. And now everyone is suddenly annoyed.

Twitter has suspended a bot account responsible for prematurely revealing the answers to the viral language web game.

This daily puzzle has grown a dedicated audience of millions of daily players as people come together to try and figure out a new five-letter word assigned to them by British software engineer Josh Wardle.

Wardle originally invented the game to entertain his wife's love of word games.

But the @wordlinator profile seems determined to spoil the fun for those who share their score on Twitter.

The robot account automatically replied to players who published their score with this type of message: "You know what? We don't care about your poor linguistic escapades. For your pain, the word for tomorrow is: [insert answer here]".

The account was "suspended for violating Twitter's rules on automated profiles and for sending unwanted mentions", explained a spokesperson for the platform to AFP.

How does Wordle work?

Wordle's premise is simple – guess a random five-letter word in under six tries using the guidance of a colour-coded system that helps you make accurate deductions.

Green tiles confirm the player's positioning of that letter is correct. Yellow tiles suggest the letter belongs in that word, but not in the position you've guessed.

The game's dreaded greyed-out tiles are deducted to guide the user away from making any misguided choices where that letter isn't relevant to the answer. All grey letters discovered by the player are stored in the game's keypad for ease as you go along.

The web platform keeps track of each player's winning/losing streaks, how many turns it took to guess the correct answer and a running clock of when the next 'Wordle' is unleashed unto the world.

The social contract we are all upholding to not spoil the day's Wordle has slightly restored my faith in humanity.

me for 1 minute everyday with wordle vs me the rest of the day pic.twitter.com/2hs34EBMvd

Spoiling the fun for other players?

Twitter has said it does not tolerate its platform tools being used to "annoy" other users.

Its rules specify in particular that mentions, replies and unsolicited, aggressive and bulk direct messages may lead the platform to suspend or close the accounts concerned.

Although only available on the web, and not in the form of a mobile application, the game was adopted very quickly in particular thanks to Wordle's emoji-focused function of sharing the score on to social media – revealing the process of elimination without spoiling the solution.

It is likely that the individual responsible for the @wordlinator account found the winning words simply by looking at the website's computer code. Fellow cheats have since managed to do the same.

“But what kind of sick and perverted person can hate that people have fun innocently enough to hack Wordle?” asked a player on Twitter on Tuesday.

Given Twitter's ruthless approach to the matter, we may never know.