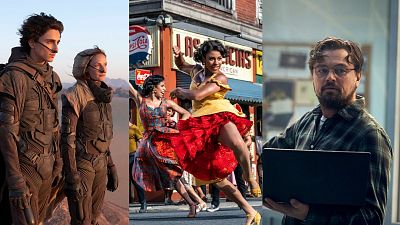 The Producers Guild of America's annual nominations are considered one of the strongest predictors for what ten films are most likely to be nominated at the Oscars.

This year's selections place the likes of 'Dune', 'West Side Story' and 'Don't Look Up' in pole position for the top awards at the 94th Academy Awards, due to take place on March 27.

In the past three years only one film – last year's 'The Father' – was selected by the Academy after missing out on PGA selection.

The guild has predicted 22 of the 32 winners of the Best Picture Oscar since its creation. Each year, its selections are presented on the same day voting for Oscar nominations commence.

Box-office hits 'Spider-Man: No Way Home' and Daniel Craig's final foray into as James Bond, 'No Time to Die', were dealt a blow with their absence on the list.

Which ten films have been selected this year?

Both the PGA Awards and the Academy use a preferential voting ballot and choose 10 nominees, with selections famously overlapping with scary levels of accuracy.

The Producers Guild of America's selection for 2022 is as follows:

The influence of America's film guilds cannot be understated

While the PGA nominated a number of starry, bigger-budget films in 'Dune' (which sold the most tickets of the bunch) and 'West Side Story,' five of the nominees came from streamers, including three Netflix titles ('Don't Look Up,' 'The Power of the Dog,' and 'Tick, Tick...Boom!')

The influence of America's film industry guilds doesn't end there. Many of these predictions have been further supported by two other institutions – the Directors (DGA) and Writers Guilds (WGA) – who also published their nominations on January 27.

In the last decade, every DGA nominated film has scored a best-picture nod at the Academy Awards.

Those picks not only give a snapshot of the most likely Oscar nominees for directing, but also suggest those five films are best-placed for a Best Picture nomination.

Many same films cropped up across the WGA's list, though a handful of notable contenders weren't eligible for due to differences in criteria: namely 'Belfast,' 'The Power of the Dog' and 'The Lost Daughter.'

These omissions make way the introduction of Wes Anderson's 'The French Dispatch' and Guillermo del Toro's 'Nightmare Alley' as contenders.

Nominations for the 94th Academy Awards will be announced February 8.