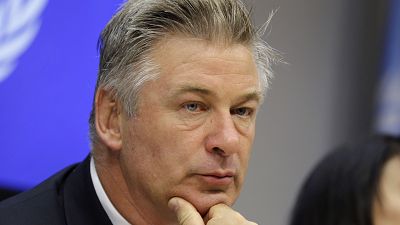 Alec Baldwin has claimed he “didn’t pull the trigger” on a gun that killed a cinematographer, in an explosive interview.

Baldwin was rehearsing a scene for his upcoming western “Rust” when he fired the revolver which he believed to be filled with blanks, killing Halyna Hutchins.

Another person, director Joel Souza was injured in the incident.

"I didn't pull the trigger," Baldwin says in a clip released by US news network ABC ahead of the hour-long exclusive on Thursday.

"I would never point a gun at anyone and pull the trigger at them. Never,”

The clip of Baldwin’s interview, his first since the fatal shooting, shows the actor breaking down in tears when describing his admiration for Hutchins.

The clip also shows Baldwin describing the event as the worst thing that has ever happened to him, “I think back and I think what could I have done?”

What happened on the set of “Rust?”

The movie’s on-set armourer Hannah Gutierrez Reed, who was initially implicated, has previously claimed she is the victim of a setup.

Investigations now focus on where the live rounds, which industry experts have said should never have been on the set, came from. Police searched a property in Albuquerque, New Mexico this week, which they believe is connected to the ammunition supplied to the set.

The search took place after Seth Kenney, owner of PDQ Arm & Prop (which supplied “Rust”) told police that he "may know" where live rounds came from.

Kenney told detectives "a couple years back, he received 'reloaded ammunition' from a friend," and that the ammunition stood out in his memory because of a star-shaped company logo.

It is said that the armorer on the film, Hannah Gutierrez Reed, loaded the gun with five dummy rounds on Oct. 21, but struggled to add a sixth round before a lunch break, when the revolver was locked in a truck. The final round was added after lunch when the gun was cleaned.

Investigators have described "some complacency" in how weapons were handled on the "Rust" set. They have said it is too soon to determine whether charges will be filed, amid independent civil lawsuits concerning liability in the fatal shooting.