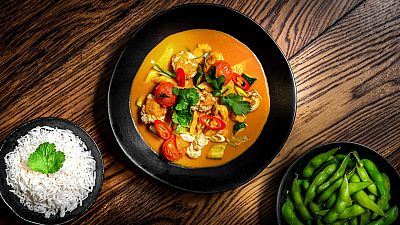 Sloane Place restaurant's award-winning chefs, Bernhard Mayer and Maryono share with The Kitchen their aromatic lamb & coconut yellow curry recipe. The cuisine of the London-based restaurant is inspired by the very best of Asian and European cooking.

Curry is a cuisine that very much embodies the joy of sharing and has been a British staple since the days of the Raj. This is a rich and delicious recipe using a thoroughly British meat – lamb – combined with exotic spices and flavours that Chefs Bernhard and Maryono have come to love during decades of cheffing across Asia and Europe.

This yellow curry is a customer favourite as it works as well in the summer with its freshness, as it does in winter for its warmth and heartiness. Perfect for a crowd or something to last the week (the taste just gets better and better after a day or two).

Bernhard Mayer, Head Chef of The Sloane Club and Sloane Place in London, brings his German heritage and European flair to the kitchen alongside a 35-year international career in some of the world’s most well-loved restaurants.

restaurants and took his first tenure in London in 1997 before taking the helm as Executive Chef at a luxurious triumvirate of venues: Cobblers Cove in Barbados; The Regent Hong Kong and Four Seasons Hotel Jakarta.

Bringing back new global flavours to UK shores, Bernhard moved to The Savoy where he oversaw each of the hotel’s famed culinary outlets for five years.

In 2014, Bernhard took charge of all food and beverage at The Sloane Club and Sloane Place

Chef Maryono Maryono began his culinary career in Jakarta, Indonesia, where he started working for the Four Seasons Jakarta and began his association with Bernhard Mayer. After a decade Maryono moved to the UK and worked at such revered dining rooms as The Goring, The Savoy and The Mondrian before joining Bernhard at The Sloane Club and Sloane Place as Head Chef in 2016.

In 2022, The Sloane Club celebrates its centenary year when Bernhard and Maryono will mark the occasion with a series of special anniversary dishes.