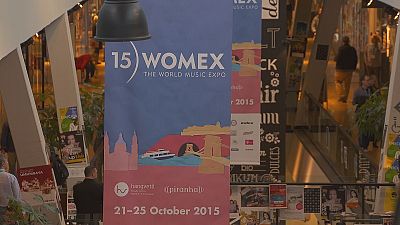 <p>This year the Hungarian capital Budapest became the centre of world music as it hosted the <a href="http://www.womex.com/" title="WOMEX">World Music Expo</a>. </p> <p>Bands from all over the world made appearances and the city was thronged with around 3,000 producers, record company executives, musicians and festival organisers. </p> <p>Estonian folk-rock band Svjata Vatra (Holy Fire) were there to promote their new CD, Freedom. Ruslan Trochynski, a singer with the band, said: “All musicians are Estonians. Vikings and Cossacks together. It is very powerful!”</p> <p>Producers say <span class="caps">WOMEX</span> is an annual fixture in their diaries. Alex Davidson, a producer at Naff Records explained: “This year we’ve found a Brazilian singer, Renato Baccarat, and a Tunisian singer, Jawhar. So it is very widespread. We come to <span class="caps">WOMEX</span> basically to meet and connect with the international world music scene and we get to meet them every year here at <span class="caps">WOMEX</span>.”</p> <p>This year the <a href="http://www.womex.com/programme/womex_award"><span class="caps">WOMEX</span> Professional Excellence Award</a> was presented to Iranian producer, Ramin Sadighi, founder of Hermes Records. He says that international knowledge about Iran’s music industry has in the past been minimal due to lack of contact, but this is changing: “Many people think the music scene in Iran is not thriving, but it’s the opposite. We still sell albums in Iran, we have very popular concerts in Iran, there is a very intellectual musical scene.” </p> <p>Alexander Walter, the director of <span class="caps">WOMEX</span>, says live music is becoming more important and world music is constantly changing. “World music became, let’s talk about the last 20 years, in general, it became very open. There’s more electronics coming in, the styles meet each other. It is getting more mixed.” </p> <p>“Maybe these people are making decisions about next year’s new world music releases and appearances at the big music festivals,” said Euronews’ correspondent Gábor Kiss from the event. “It’s a huge variety of artists. Representatives of more than 600 companies from 90 countries came to the <span class="caps">WOMEX</span>.”</p>