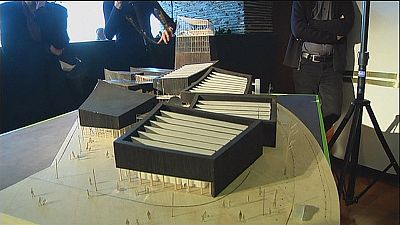 It is only a model for now, but the new Guggenheim Museum for Helsinki has already kicked off a scrap over the 130-million-euro project’s costs, location, and much more.

It's extremely unfair, because the city will be paying for everything

The Finnish capital’s winning design is by two architects, Moreau and Kusunoki, a Franco-Japanese pair based in Paris.

Their project was picked from six finalists, shortlisted last year from more than 1,700 entries, a record number, from 77 countries.

“The concept is openness and transparency,” says Nicholas Moreau.

“And on a human scale,” adds Hiroko Kusunoki. “It’s also about how to connect the city and the museum itself, that’s why we call it ‘Art in the City’.”

Professor Mark Wigley was Jury chair for the competition and is Dean emeritus of the Graduate School of Architecture, Planning and Preservation at Columbia University:

“So it’s as if it already was here, and I think that’s super interesting, to make a project that looks like it belongs in Finland and yet it is also new.”

But besides the construction costs there is an additional license fee of more than 20 million euros to be paid to the Guggenheim foundation, for whom Helsinki has reserved a prized lot in the city’s harbour for the museum.

Dr. Kaarin Taipale is an urban researcher and a local politician. Like many here, she resents public funds handed over to a private American corporation, and says the money could be better spent.

“It’s extremely unfair, because the city will be paying for everything. Not only the construction of the building, but of course, giving this very precious site away for free and paying for all the costs, personnel and maintenance of the building.

This would be a minimum seven million euros annually onto the city budget at a time when we are cutting from everything else,” she says.

A 2012 survey in Helsingin Sanomat, Finland’s largest newspaper, found three-quarters of people in Helsinki opposed the project, which several polls since have confirmed.

Now there is a recession and government plans for deep public spending cuts that will hit the Nordic country’s generous welfare system.

“The Guggenheim concept is expensive for Finland. That’s what the people surveyed think. And maybe people don’t believe the benefits will cover that cost. So they are sceptical towards that, and an art museum isn’t maybe the first thing people think should be invested in, because times are bad, as everywhere,” says the paper’s Head of Culture Hanna Mahlamäki.

Facing tough resistance, Guggenheim supporters have been fighting back. After the winning design was unveiled a public debate was held to allow people to question the architects of the new museum.

“I think this is a great, great honour, and a great great opportunity for Helsinki, to get this Guggenheim museum here. I hope they will go forward,” says Managing Director Juha Christensen.

“Of course the Guggenheim brand is strong in terms of culture, but Finland is also very strong at creating brands of its own. By spending such an amount of money, you could create your own cultural brand, so you should think about that,” says architect Omer Kanipak.

When Helsinki’s city planners bought into the Guggenheim franchise, they were hoping for the so-called ‘Bilbao effect’.

The Basque city’s vibrant cultural center was key to an economic renewal when Guggenheim came to town.

An ‘anti-competition’ invited architects, urban planners, landscape architects, artists, environmentalists, students, activists, poets, even politicians to submit counter-proposals for the site – anything but another Guggenheim.