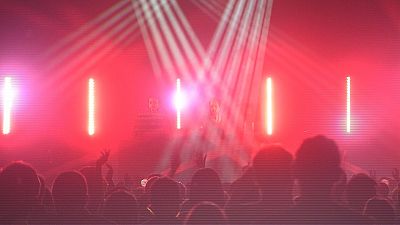 <p>“Voices from the Lake” an Italian duo made up of DJ/producers, Donato Dozzy and Neel, warmed up the dance floor with their hypnotic vibes at the first night of the <a href="http://www.nuits-sonores.com/">Nuits Sonores</a> music festival in Lyon.</p> <p>The Italians are among more than 200 artists of 22 nationalities performing at this year’s urban festival, an event that continues to invest in some of the most remarkable industrial heritage sites and public spaces of the French city.</p> <p>“I like all kinds of music. Both in my work with Donato and in my solo work I play techno, house and ambient music. I listen to music from the seventies from protopunk, which is music from the mid-1960s to mid-1970s that influenced punk rock to psychedelic music. I also listen to crowd rock and techno music. In fact it depends on my mood but most of the time I try to listen to different music styles,” explained Neel, DJ, producer and sound designer.</p> <p>A highlight of the opening night was the live performance of Egyptian-Lebanese group Halawella made up of Egyptian singer Maryam Saleh and Lebanese musicians Zeid Hamdan and Marc Codsi.</p> <p>Halawella presented their blend of traditional Arabic songs, hip-hop and electronica, which unites to produce raw, energetic music that reflects on contemporary political issues.</p> <p>“When we’re writing our songs, we don’t have in mind a very precise musical style, really. We can say, however, that we are more into modern pop, I guess.</p> <p>‘Regarding the themes of our songs, we can say that most of them are critical of the political system, we even make fun of politics, in a way it’s a sort of “black comedy”,” said Maryam Saleh.</p> <p>In this 13th edition of the Nuits Sonores, the festival wants to go back to its roots, getting closer to the audiences and offering a wide and diverse musical programme of high artistic standards, according to Violaine Didier, Festival Programme Director:</p> <p>“Nuits Sonores is not just an electronic music festival. A large part of the programming includes other genres. We aim to be at the forefront of the most creative that is being done. It is very important for us to cultivate appearances by independent artists, which we have done,” she said. </p> <p>Having shone a spotlight on Manchester, Brussels, Tokyo, New York and Glasgow in the past, Nuits Sonores this year turned the focus on the city of Warsaw.</p> <p>The Warszawska Orkiestra Rozrywkowa is among a dozen of Polish acts to perform during the festival.</p> <p>“Well, Warsaw was in our sights as we wanted to go to the east and we found a city a huge mystery which had a very strong alternative culture which was underground and we love digging. One of the objectives of having carte blanche is to discover artists that are not anywhere else,” explained Violaine Didier. </p> <p>The 2014 edition of Nuits Sonores attracted more than 130,000 visitors and this year most of the concerts are already sold-out.</p> <p>The13th edition of Nuits Sonores will also include free events and a programme specially for children – the mini sonore. The festival runs until May 17.</p>