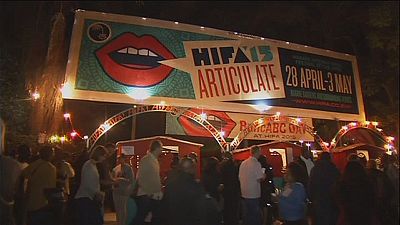 <p>The curtain has come down on the 15th edition of the <a href="http://www.hifa.co.zw/">Harare International Festival of the Arts</a>, considered one of Africa’s premier cultural events.</p> <p>Founded in 1999, the festival is a showcase for the arts from Zimbabwe and much further afield, drawing award-winning artists from across the globe.</p> <p>“To put a festival on at this level, at this scale, requires a lot of resources,” said the festival’s founder and artistic director Manuel Bagorro. “There’s a lot of human resources, there is a lot of tears and sweat on the human side. There is also close to a million dollar budget for the year, people from other countries cannot believe how we manage to do something so large and so mixed and so diverse on that amount of money.” </p> <p>Zimbabwe is in the midst of a severe economic crisis that has crippled virtually all aspects of life. The arts industry has not been spared, with very few of the country’s citizens able to spare money to enjoy the arts. Some performers, like Derek Gripper, one of South Africa’s foremost guitarists, have been known to forego performance fees to help keep the show on the road. </p> <p>“It’s an incredible festival and such an honor to be invited to play,” he said. “When I came for the first time in 2012 I was completely blown away. I had no idea it was going to be like this, I had no idea there was going to be such a diversity. I mean, I play at a lot of festivals around the world and this is one of the best that I have been to in the last few years.”</p> <p>So far, the Festival has managed to survive thanks to funding from local businesses and multinationals. Over the years, the show has seen its share of controversy – in the chaotic aftermath of disputed elections in 2008, bands deemed critical of autocratic President Robert Mugabe were denied visas.</p>