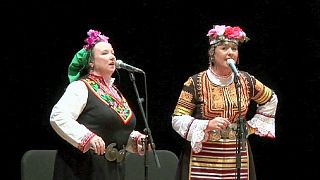 The unique world of Balkan Trafik! has once again brought the best of the Balkans to the heart of Europe, through a programme of music, dance, debates, workshops and films. Renowned composer Goran Bregovic – one of the most important Balkan musicians today – was guest of honour at this year’s festival.

This year Balkan Trafik! has expanded a bit but I would say that our main theme remains the same - that's to say diversity.

For four days in late April, Brussels becomes the cultural capital of the Balkans. The artists who come here are living legends in their own communities. But first and foremost, the festival is an opportunity to reflect.

What started as a social project by French-Slovak musician Ivan Akimov has become a huge event, opening new perspectives on the lives of young Roma.

“Our group is called Kesaj Tchave,” Akimov told euronews at this year’s festival. “Kesaj is a Romany fairy who says that if someone wants to receive love, they first have to know how to give it. And Tchave, in the Romany language, means children. So we are talking to children, telling them that we live in a wonderful world, that we can succeed, that we can believe in a magnificent, beautiful live for everyone”

For the first time, Balkan Trafik! is collaborating with the Brussels Short Film Festival, which has come up with a special programme celebrating Balkan cinema. The film Parada, made by Serbian director Srdjan Dragojevic, takes a humorous look at the question of homosexuality.

“It’s very hard to tell the history about a quite problematic – and sometimes tragic – issue in the Balkans, which has a huge level of homophobia, in a comic way,” explained Dragojevic.

This is the ninth time the festival has come to Brussels and this year organizers made a few changes and expanded the scope of activities beyond the Balkans. Nicolas Wiëers, who founded the festival, said they wanted to fully include the region’s Roma population.

“There’s a big Roma minority who travel across borders and that allowed us to go as far a field as Slovakia, and even Ukraine. So this year Balkan Trafik! has expanded a bit but I would say that our main theme remains the same – that’s to say diversity.”

Nine years on, Balkan Trafik! is drawing huge crowds who want to experience the music, dance and culture of South Eastern Europe.

“I wanted my little girl Mia to see this so that’s why we’re here,” says one man enjoying the festivities at this year’s event. “And we’re really happy. It’s a crazy atmosphere and it’s very cool.”