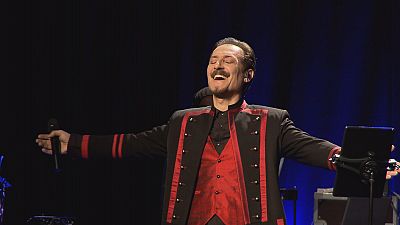 <p>They call him “the Elvis of Afghanistan”. </p> <p>Singer-songwriter <a href="http://www.farhaddarya.info/biography_english.html" rel="external">Farhad Darya</a> is also an award-winning UN ambassador and peace activist. </p> <p>The US-based Afghan artist has been touring Europe to try to spread his message of peace.</p> <p>He says music in his country has suffered the same fate as its people, at the hands of the brutally oppressive Taliban regime that ruled Afghanistan from the mid-1990s to 2001. </p> <p>“Music plays an important role in the life of the Afghan people, who consider it a popular art form. Afghans are increasingly drawn to music. But there are some people, who have nothing to do with Afghan culture, who want to suppress music,” he told euronews at a concert at the Théâtre St Michel in Brussels. </p> <p>One of the most influential musicians on the Afghan music scene and a household name in several Middle Eastern countries, Darya is convinced music is the future for his war-torn nation: “The young generation has been taken hostage by some of the things going on in Afghanistan, and music and song can help them,” he said. “This art form will help them escape this situation and I am certain these young people are the future of Afghan music.”</p> <p>After living in exile for more than a decade, Darya was able to return to Afghanistan after the fall of the Taliban. Since 2001, he has been working with street children as part of a project called “Kochah” or “Street” in Afghan.</p> <p>“I don’t think it will be the adult population that will bring change to Afghanistan, they are wounded – morally – and their way of thinking is outdated. The future is in the hands of the children and I want to support them financially and help them get an education,” said Darya. </p> <p>Another of his projects is the recent <a href="http://centralasiaonline.com/en_GB/pakistan-articles/caii/features/pakistan/main/2014/11/21/feature-01" rel="external">'Drops with Darya'</a> campaign. Moved by reports about security personnel bleeding to death, Farhad Darya launched a blood donation drive, asking Afghans across the nation to give blood to the country’s security forces. </p> <p>“I called on politicians and even on the president to join me in this challenge, and President Ghani did. Ministers also came and gave blood. The goal was to show that life is precious and it’s important to pay homage to our soldiers,” he said. </p> <p>While he says he has no ambition to become a politician, the award-winning artist says it’s impossible to separate music from politics: “What I do is politics. You can’t talk about Afghanistan without talking about politics. It may look like I’m using fame to enter into government, but that’s not my goal.” </p> <p>An international artist in his own right, with fans around the world, Farhad Darya is currently wrapping up a European tour that has seen him rewarded for his peace and human rights activities at a ceremony in Vienna. </p> <p>While fans outside of Afghanistan have to buy tickets for his concerts, back home the shows are free, as he says he believes people shouldn’t have to spend money on concert tickets when they don’t have enough to eat.</p>