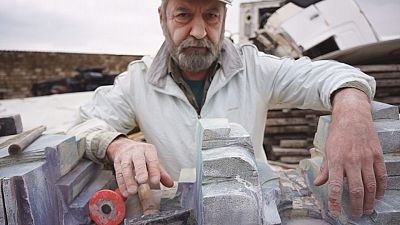 <p>The cognoscenti of art in Azerbaijan were at the Museum of Modern Art in Baku for a trip back to the stone age.</p> <p>One of the country’s leading artists, Huseyn Hagverdi, was showing a solo exhibition – a new series of stone sculptures.</p> <p>For the 58-year-old artist, stone is like the hard disc of a computer, the memory of our earth and mankind. His work joins the present and the past.</p> <p>“So, Huseyn you went back to the stone age?” asked euronews correspondent Wolfgang Spindler.</p> <p>“Yes,” replied Huseyn Hagverdi. “I am back but I think we never left the stone age – yes, of course, stone is part of our life all over the world but specially in Baku Absheron. It’s our local stone and many buildings and ancient architecture was built by this stone.”</p> <p>Local sandstone from Azerbaijan was the raw material for the 45 sculptures the artist created over two months. In his hand he worked the angle grinder like a brush, “painting” his designs.</p> <p>The exhibition is divided into different cycles creating an air of mystery. There is, for example, the cycle of Requiem in which there are 11 sculptures. Eight from the cycle of Totems. </p> <p>“He is laconic, as a sculptor and as a human being he is very laconic. Totems are connecting us to the past. It’s also about human beings who live in big megapolis and those buildings also remind us of totems,” explained Museum Curator, Chingiz. </p> <p>Interpretation is, of course, everything in art and Huseyn’s sculptures can also be seen as memorials to Baku, where modern urbanism has erased a lot of the most popular central neighbourhood – now concrete instead of stone.</p> <p>“When we say that I like stone, I cut it, polish it and so on. It seems we violate a material. What for? In order to understand, to try to realise who we are, what we are and what we are for,” opined the sculptor.</p> <p>It is life itself, says the sculptor, which is at the centre of his creative inspiration. He grew up under Soviet dominance where artists had a low standing in society and little prestige.</p> <p>Today artists receive support from the state and the Museum of Modern Art in Baku focuses on those from Azerbaijan. It is a two-way process it seems, for most of the young artists reflect the country’s national identity in their work.</p> <p>“A popular topic for many young artists I think is our culture, I think that is something that affects many young artists because through the globalisation and the fast pace of time moving they kind of lose the sense of their identity sometimes so they try to go back to their roots,” said Aida Mahmudova, Curatorial Director Museum of Modern Art. </p> <p>The exhibition called “Stone” by Azeri artist Huseyn Hagverdi can be seen at the Museum of Modern Art in Baku.</p>