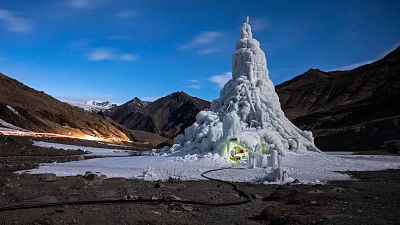 The youth group that built this ice stupa in the village of Gya installed a café in its base. They used the proceeds to take the village elders on a pilgrimage. March 19, 2019   -   Copyright  Ciril Jazbec
By Natalia Liubchenkova  •  Updated: 15/04/2021

Man-made glaciers, giraffes rescue challenges and pigeon friendships are among the photographed themes chosen this year by the World Press Photo Foundation, an independent organisation that gives recognition to the strongest press photography annually since 1955.

Among the highlights of this year's World Press Photo competition are photographs and series that invite us to rediscover different corners of our planet from a new perspective, draw attention to the environmental issues, and offer new ways to observe and reconnect with our surroundings during the pandemic.

A curious California sea lion on the photograph above plays with a face mask.

Its natural habitat became a popular focus for local travel in the state when lockdown restrictions were put in place. Personal protective equipment can be mistaken for food by birds, fish, marine mammals, and other animals.

PPE also contains plastic, and so contributes to the eight million tons of plastic that end up in the oceans every year. According to World Animal Protection, every year an estimated 136,000 seals, sea lions, and whales die from plastic entanglement.

Surgical masks break down into millions of microplastic particles over time, which are eaten by fish and other animals, and therefore carry contamination back up the food chain, potentially also affecting humans.

The picture is the 1st Prize winner in the category 'Environment - Singles' category.

Hpakant in Myanmar is the site of the world’s biggest jade mine - and the largest supplier of jadeite, the more valuable of the two forms of jade.

Demand from China, where jade is a popular status symbol, fuels the industry.

The photograph is the 2nd Prize winner in the category 'Environment - Singles' category.

One Way to Fight Climate Change: Make Your Own Glaciers by Ciril Jazbec, Slovenia, for National Geographic

As Himalayan snow dwindles and glaciers recede, communities in the Ladakh region of northern India are building huge ice cones that provide water into summer. Most villages face acute water shortages, particularly during the crucial planting season in April and May.

Eight years ago, Sonam Wangchuk, a local engineer and innovator, came up with a form of glacier-grafting that creates artificial glaciers in the form of conical ice heaps, resembling Buddhist religious stupas.

The ice stupas that are created in winter, store winter meltwater and slowly release it for the growing season in spring when it is most needed for crops.

The project was awarded 2nd Prize in the 'Environment - Stories' category.

Rescue of Giraffes from Flooding Island by Ami Vitale, United States, for CNN

Rothschild’s giraffes are a subspecies of the northern giraffe, and are classified as endangered. Rising water levels in Lake Baringo over the past ten years have cut the Longicharo peninsula off to form an island.

Particularly heavy rainfall in 2019 caused further floods, stranding nine giraffes. The local community worked with conservationists from the Kenya Wildlife Service, the Northern Rangelands Trust, and Save Giraffes Now, to build a barge and transport the marooned animals to a sanctuary in the Ruko conservancy on the shores of the lake.

The rain also led to an abundance of food on the island, so edible treats could not be used to entice the giraffes onto the barge. Instead, the animals had to be tranquillised, which is a dangerous procedure given their anatomy, as they are at risk of choking on their own saliva, and changes in blood pressure can cause brain damage. A vet was on hand to immediately counteract the drug; the giraffes were then hooded and led onto the barge with guide ropes.

The photograph was awarded 1st Prize in the 'Nature - Singles' category.

Pandemic Pigeons — A Love Story by Jasper Doest, The Netherlands

A pair of feral pigeons befriended the photographer’s family, who were isolated in their apartment in Vlaardingen, the Netherlands, during the COVID-19 pandemic.

Ollie and Dollie, as the family named them, were regulars in the house, their daily visits a reminder that humans are not alone on this planet, even while living isolated in urban areas.

Birds escaping or released from a domestic environment became the first feral (or city) pigeons. Although pigeons are believed to be vectors of diseases, the evidence is to the contrary.

It is rare for city pigeons to transmit a disease to humans, and while they do transmit contagions such as Salmonella and avian mites, infecting mammals is rare.

This series is awarded 1st Prize in the 'Nature - Series' category.