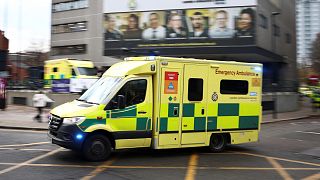 Britain's once-vaunted National Health Service is in a critical condition.

This week sees a fresh round of strikes by nurses in England, and more industrial action by ambulance crews. Patients are enduring 12-hour delays when they call emergency services, and if they finally make it to hospital, face being treated in corridors with beds in chronically short supply.

A record 6.8 million people are on hospital waiting lists in England and Wales alone.

But it didn't always used to be this way.

The NHS lost its prized position as the best health system among 11 rich countries just a few years ago, sliding down to number four due to delays and difficulties in accessing care, as ranked by the US-based Commonwealth Fund.

So how did this happen, and what's the diagnosis to restore the NHS back to rude health?

A multitude of factors have helped bring the NHS to its knees.

Staffing shortages are currently one of the biggest problems facing the healthcare system, with staff numbers and retention among core concerns.

As of September 2022, there were around 134,000 vacancies in the NHS, representing around 10% of its entire workforce. With 1.2 million workers, it is one of the biggest employers in Europe.

“Part of the problem is related to staff leaving and an element of that is down to pay,” said Mark Dayan, Head of Public Affairs at the Nuffield Trust, an independent health think-tank. “That underlies a lot of the pressure on the service.”

A hundred thousand nurses, and thousands more ambulance drivers launched historic strikes in December, walking out over pay and concerns about patient safety, amid the crisis.

In Scotland, where Nicola Sturgeon's devolved government runs the NHS, a strike by nurses this week was put on hold after an agreement was reached to discuss a new pay offer.

The reasons behind the scarcity of workers are varied, and often overlapping.

“This [crisis] is not because of COVID. It's not because of the war in Ukraine,” Dr John Puntis, a retired Consultant Paediatrician and co-chair of the Keep Our NHS Public campaign, told Euronews.

“It's down to a failure of government planning,” he said. “You can't run an efficient service if you don't have enough staff, they are the first thing you need.”

Understaffing was also creating a cascading vicious cycle. Without enough staff, others have left the profession in droves, pushed to breaking point by excessive workloads.

“The government say they are recruiting more people… but they leave after a few months as it is too stressful,” said Dr Puntis.

He also pointed to how Brexit had compounded staff shortages, though added that the NHS had big problems even before the UK left the European Union.

Data released by the Nursing and Midwifery Council (NMC) in May showed that there were 58,000 fewer nurses in the UK than if the numbers arriving pre-Brexit had continued.

“Nursing saw a far more dramatic collapse in EU and EFTA migration around the time of the referendum, as mass recruitment ended and a new language test came in,” their analysis said.

‘It's all about reducing public spending'

At the heart of this is money.

“In the long run, funding hasn't kept up with demand on the service,” said Dayan, pointing out that chronic under-investment in staffing, as well as new buildings and equipment, had drastically reduced the capacity of hospitals to treat patients.

“Hospital beds are just very full,” he told Euronews. “That makes it difficult to admit people and send them home in good shape.”

Soon after the Conservatives took the reigns of government in 2010, they followed a policy of austerity, curtailing spending in a controversial bid to bring down public debt.

The NHS was targetted, says Dr Puntis, with budget increases held at 1 - 1.5% for several years.

While this allowed the "politicians to say they’d given more money to the NHS", it actually meant a real-terms cut in funding, as inflation rose and the population grew larger, he explained.

“Even if you give the NHS an extra pound, you can still say you have given it more money than ever before.”

Data from the Health Foundation shows that the UK has spent about 20% less per person on health each year than similar European countries over the past decade.

Nurses have borne the brunt of this pay restraint. Their pay has been frozen for several years, eroding their purchasing power even as the cost of living increased -- a situation only made worse by last year's soaring inflation, and rising energy bills.

For the majority of nurses across the UK, real terms salaries have declined by as much as 20% since 2010, according to the Royal College of Nursing.

'A two-tier system is emerging'

As waiting lists for operations grow ever longer in the chaos, increasing numbers of patients are resorting to paying for NHS services out of their own pockets, which is having a profound effect on the nature of healthcare in the UK.

People self-paying for treatment rose by more than 33% between 2019 and 2022, as per figures by the Private Healthcare Information Network published in December.

Cataracts are the most commonly paid-for procedure, but hip and knee replacements -- typically needed by the elderly -- have also seen huge rises.

“There’s a lot of evidence that this increase is driven by the long waiting times in the NHS”, said Dayan, pointing to the implications had for poorer members of society.

“Whereas better off people may self-fund when they can't get timely care, the less well off are not accessing healthcare or receiving it on time,” he told Euronews.

“Care is being allocated to people who pay for it rather than people that need it most which is quite contrary to what the NHS is supposed to be there for.”

Others push these arguments even further, claiming that the current crisis reflects an underlying drive by the Conservative government to privatise the service, shifting it to a paid model.

“It’s a classic paradigm with public services,” says Dr Puntis. “If you want to get rid of them, you defund them. Then people will say, this is terrible, we need to do something differently”.

Former Health Secretary Jeremy Hunt, who now holds the purse strings as Chancellor of the Exchequer, co-authored a book calling for the NHS to be replaced with an insurance market system.

The government has previously claimed it will never privatise the NHS, and in a 2017 Ipsos Mori poll nine out of ten people agreed that the NHS should be tax-funded, free at the point of use, and provide comprehensive care for all citizens.

“People in this country, up until very recently, they've had this enormous security, that if they're ill, they will get good treatment, no matter how much money they’ve got in the bank," said Puntis.

“We've actually taken it for granted -- that's part of the problem.”