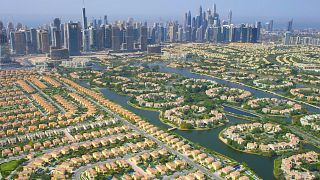 The UAE property market and particularly that in Dubai saw record-breaking transaction numbers over 2022, a trend experts are forecasting will continue into 2023.

Despite the economic outlook globally, high-net-worth individuals have continued to invest in Dubai in the past 18 months, which boosted the luxury market.

Real estate experts say a maturing market has driven demand inside the country from apartments to townhouse and villa communities with prices in 2023 expected to exceed pre-pandemic levels.

Cavendish Maxwell aggregates real estate data and market intelligence in the region and say the great performance is due to post-pandemic recovery.

Zhann Jochinke, Director of Market Intelligence & Research, Cavendish Maxwell, said: “The Market bottomed out at the end of November of 2020. Then we had the pandemic hit and the markets had to bounce up and it was driven by resales of villas and townhouses.”

He added that over the last 12 months, off-plan sales once again grew as a proportion of sales as many end users were priced out of the resale market.

Experts say there is a consensus as to why the city is outperforming international markets.

Zhann Jochinke, Director of Market Intelligence & Research, Cavendish Maxwell, added that if you compare it to any of the major global markets, Europe, Hong Kong, Australia, and the U.S., all of those are more affected by their local market.

“They're affected by their interest rates, their employment cycles. To buy in the UAE is very unique in the way we’re positioned with a large expatriate workforce. And in the real estate market, they're building so much new product.”

Casual dining group Jones the Grocers started with humble beginnings in Australia over 25 years ago and has since expanded to 33 stores across the Middle East and Asia with a further 15 in the pipeline.

The company is due to launch its flagship store at London Heathrow. The CEO, Yunib Siddiqui, told Euronews that the specially developed concept site uses the best of what they have globally, plus adding a few components.

“Our strategy has been mixed. We've focussed both on franchise growth because we've invested a lot of money and resources in our training capacity, and in our brand compliance capacity, and we continue to do so. And the second part of our strategy is to grow company-owned stores, but very selectively.”

The company moved their global headquarters to Dubai after the stores in the region became the largest franchise segment.

“We put out seven stores in four years and our revenues were a significant big chunk of the global business,” Mr. Siddiqui said.

The CEO said there has been a big transformation in the casual dining scene over recent years, “First of all, the competition means that you've always got to be on your toes. Innovation, driving service excellence, food quality, and keeping in touch with global trends. This market moves very fast and we've got to move with it. You can't rest on your laurels. You've got to keep on moving, keep on innovating,” he said.

A French-based project in nuclear fusion may be delayed for years as it seeks to repair construction faults, according to its boss.

The news that the Iter project has a further revised schedule comes just weeks after scientists in the United States announced an important technical breakthrough in their own research on nuclear fusion.

Iter was set up in 2007 - aimed at building the world's biggest fusion machine creating carbon-free energy through a process similar to that of the Sun.

Fusion involves forcing together the nuclei of light atomic elements in a heated plasma held by powerful magnetic forces.

Iter's goal was to create the necessary plasma by 2025, but bosses say that the deadline is being postponed after corrosion was found in some components.

The delay comes as the US team working on a similar project had a breakthrough in December.

Mr. Barabaschi added that his team's initial time frame was unrealistic, "It's a matter of telling you that in essence, I know that it's a substantial amount of time, but I don't know precisely how much time. This is being analysed at this point in time, and until I have an analysis, you know I prefer not to pronounce myself."

It’s hoped Iter will be able to make up for some of the delays as it prepares to enter the full phase, currently scheduled for 2035.

Why increasing numbers of people are relocating to Dubai