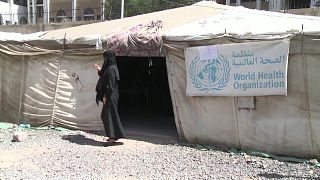 Larger and more deadly cholera outbreaks this year due to climate change, the WHO says   -  Copyright  CCTV
By Roselyne Min  with AFP  •  Updated: 21/12/2022

“Unprecedented” and “deadlier” cholera outbreaks have been reported in around 30 countries and regions this year, the World Health Organization (WHO) says.

Cholera is an acute diarrhoeal infection caused by ingesting contaminated food or water and can be fatal if not treated. The Who said that countries including Haiti, Yemen and Lebanon all reported cholera outbreaks this year.

"The situation is quite unprecedented, for not only we are seeing more outbreaks, but these outbreaks are larger and more deadly than the ones we have seen in the past years,” said Dr Philippe Barboza, the WHO's team lead on cholera.

The health organisation also pointed out that climate change is fuelling the global cholera upsurge.

"This year, we have a factor which is even more important which is the direct impact of climate change, with a succession of major droughts, unprecedented floods in certain parts of the world, and cyclones which have amplified most of these epidemics," said Barboza.

“The climate change impact will continue and it's very difficult to extrapolate what will happen in the year to come," he added.

The situation is quite unprecedented, for not only we are seeing more outbreaks, but these outbreaks are larger and more deadly than the ones we have seen in the past years.

The International Coordinating Group on Vaccine Provision, which WHO manages, distributes around 36 million doses of cholera vaccine annually.

But the WHO temporarily revised the cholera vaccination recommendation in October this year due to the shortage of vaccines. The previous recommendation of two doses has been changed to only one dose.

The WHO said that manufacturers were not keen on producing a vaccine chiefly aimed at some of the poorest countries in the world.

"It is not acceptable in the 21st century to have people dying of a disease which is very well-known and very easy to treat providing that people have simple access to this treatment," Barboza said.

"The fight against cholera is not lost. We can win it but we need much more investment."